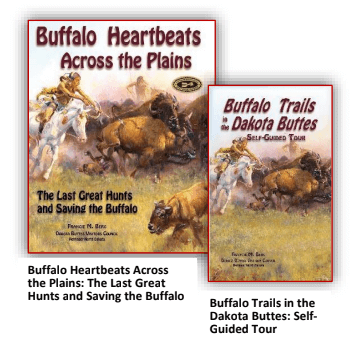 “A Historic Masterpiece! There is so much in this book . . . of history and legend”

Purchase Buffalo Heartbeats Across the Plains

AUTHOR FRANCIE M. BERG CHRONICLES THE HISTORY of the buffalo from their arrival from Asia to North America 43,000 to 9,000 years ago to today. Her storytelling-style of writing and the multitude of color photos and illustrations, including those of C.M. Russell, make this enjoyable to read and visualize. It’s a worthy book for lovers of or non-professed lovers of buffalo!

Berg brings to life the legend and mystique of these huge beasts through the intrinsic ties to the Native Americans who depended on the buffalo for life, literally and spiritually. “Lived in buffalo hide tepees, slept under soft buffalo robes, ran through tough cactus in hide moccasins and delighted in buffalo meat,” illustrate the dependency of the Native tribes.

There is so much in this book, it could literally be a couple of books of history and legend. A labor of love by the author. . . A historic Masterpiece!”-

FRANCIE DOES SO MUCH FOR BUFFALO by just putting this together. On behalf of the Standing Rock Sioux Tribe, I say thank you!”
—Mike Faith, Standing Rock
Sioux Tribal Chairman

A NEW BOOK DETAILING THE HISTORY of the American buffalo is telling the story of the last great bison hunts in the western Dakotas and efforts to restore the animal that was on the brink of extinction. Author Francie Berg takes a deeper dive into the people and places featured in her previous tour book.
—Houston Chronicle

ANOTHER FASCINATING STORY of a last hunt involved a hunt witnessed by a missionary preacher. From those hunts, a small number of buffalo calves were captured, deliberately spared because it was clear the buffalo was threatened with extinction. These calves became the foundation for a buffalo herd in South Dakota, the Fred Dupree-Scotty Philip herd, that was one of a handful of preservation efforts by ranchers that helped buffalo survive.

Berg also includes the fascinating story of Theodore Roosevelt’s trips to Dakota Territory to hunt buffalo—ironically, he played a role in the conservation of the buffalo.

FROM HISTORICAL DETAILS of Native Americans’ final great wild buffalo hunts to tales of the animal’s rescue from near extinction, a new selfguided tour across 10 sites in the western Dakotas tells the story of the last stand of the American Bison, the National Mammal.
—TRAVEL, South Africa

BISON, OR BUFFALO, ONCE THUNDERED across the heart of North America in the tens of millions. But overhunting saw their numbers plummet to a few hundred by the late 1880s.

“I could see our country was changing fast,” reads an excerpt from the new book quoting Plenty Coups, chief of the Crows. “Anybody could see that soon there would be no buffalo on the plains, and everybody was wondering how we could live after they were gone.”

Colorful illustrations, historic paintings and photographs for the history buff who may never leave her armchair.

A SUPERB ACHIEVEMENT. IT COVERS EVERYTHING about buffalo you can imagine and some things you hadn’t even imagined . . .

AT THE CENTER OF THESE EVENTS are previously untold stories and authentic, unspoiled places to witness where they took place . . . A heroic saga befitting the noble beasts themselves.

THE BUFFALO IS AMERICA’S STORY. But the final chapter belongs to Hettinger, a small town in southwestern North Dakota. For several key years in the 1880s the area was ground zero for the very last of the wild and noble buffalo.

For people willing to leave the asphalt and launch themselves into empty reaches of prairie that were once part of the Great Sioux Nation, the story unfolds in the scenery, in the imagination and in the history.

Encourages history-seekers to venture out on a bumpy two-track trail in government-owned pastures—then crawl under a barbed-wire fence.

One stands, brushing off dusty knees to look, and there below is a lazy curve of the South Grand River, bordered by old gnarly cottonwood trees.

BUFFALO TRAILS IN THE DAKOTA BUTTES and its companion book Buffalo Heartbeats Across the Plains are filled with stories that bring the events to life. They tell the little-known story of the last buffalo hunts—traditional Indian hunts rather than a slaughter by white hide hunters.

(And) just before the last wild herds disappeared, one Native American family came to the South Grand River to save buffalo calves.