Wainwright, Alberta, is a midsized town in the Canadian Great Plains with a tumultuous buffalo legacy. It lies east of the Rocky Mountains just west a few miles from the Saskatchewan border and to the northeast of Calgary.

Established in 1908, the National Bison Range is being restored to the Confederated Salish and Kootenai Native American Tribes (CSKT) of Montana’s Flathead Indian Reservation.

Hunting Before Horses, Part2: The Surround

Secrets of the Buffalo Jump

Tim Omilusik is a 42-year-old Canadian trucker from Coronation, Alberta, who runs a short- and long-haul livestock business from one end of Canada to the other, with 2,000-mile trips across the border down into Texas in between—or maybe a leg to Missouri or Wyoming.

Storytelling was an important way Native traditions and history were passed down through the generations. John Fire Lame Deer told of the White Buffalo Calf Woman tradition at a gathering in Winner in 1967.

North American bison are made up of two distinct subspecies, the smaller plains bison and the larger wood bison. They are considered
Near Threatened by the International Union for Conservation of Nature and Natural Resources.

Buffalo Traces—’Path of the Buffalo,’ Part 2

BEDFORD Oct 18, 2017—The Buffalo Trace Working Group with the Hoosier National Forest received the 2017 Indiana History Outstanding Event and Project Award from the Indiana Historical Society. The group was recognized as instrumental in uncovering the history of the Buffalo Trace and mapping its route through southern Indiana.

Buffalo Traces—‘Path of the Buffalo’, Part 1

Part 2: Hunting Calves with Buffalo Jones in the Desert, 1887

Part 1: Hunting Calves with Buffalo Jones in the Desert, 1886

On a bleak cold day—April 24, 1886—Buffalo Jones struck out with Charley Rude and Newton Adams with a team of 3-year-old mules harnessed to a light spring wagon and another team hauling a heavier lumber wagon.

They took provisions for a 6-week expedition in Texas desert country determined to capture buffalo calves for Jones’ Kansas ranch.

Their point of departure was the little Kansas town of Kendall, on the Arkansas River not far from the west border of that state.

William Hornaday published his amazing report on the slaughter of the buffalo herds in a government book in 1889, which he titled The Extermination of the American Bison.

It was intended to be the last word on bison.

In essence, the saving of buffalo focused on two major factors.

On the one hand were westerners, both Native American and whites, who saw what was happening to the buffalo and cared about saving them.

With boots on the ground, these people rescued, nourished and protected fragile buffalo calves until they multiplied into healthy and prolific herds.

Without them American bison would likely have gone extinct. There’d be no buffalo in North America today. It almost happened.

That is how Lakota hunters from the Cheyenne River Sioux tribe described the taste of buffalo to the missionary Thomas Riggs on the way to their last winter hunt in December of 1880.

For 15 years buffalo had been gone from their Great Sioux Reservation, due to settlement pressures from the east, but mysteriously they had returned and the older hunters were eager to taste their favorite meat again.

Snow fell almost continuously and the hunting party of 101—about half men and half women and children—followed the Moreau River valley west with buckboard wagons and extra pack horses. Some days they made only three or four miles in deep snow that crusted and grew deeper day by day.

The hunters grew excited that last day as they neared the Slim Buttes, where scouts told them the buffalo had returned.

They talked of how tired they were of eating porcupine, skunk, venison and badger meat. During their journey the party had killed and eaten 148 porcupines and 200 deer.

From the time he learned of it, Robert “Robbie” Magnan director of the Fort Peck Fish and Wildlife Department in northeastern Montana was troubled by the annual buffalo slaughter of excess buffalo in Yellowstone Park.

It was not enough that the bison meat was distributed to Indian tribes in neat frozen packages.

Magnan and other founding members of the InterTribal Buffalo Council (ITBC) cherished the Yellowstone Park genetics that had flowed from free-roaming bison for more than a hundred years. They wanted those genetics in their own tribal herds.

Not quite the same as “always having lived wild” in Yellowstone Park. They knew that only a reported 23 buffalo survived poaching in the Park—back in the 1890s—and the wild Yellowstone pastures had been replenished by relatively tame buffalo from half a dozen sources, both US and Canadian. So not many were actually “pure.”

Still, the Yellowstone buffalo are special and many Native people deeply desire those genetics in their tribal buffalo herds.

Over and over delegates testify: As we bring the buffalo back to health, we also bring our own people back to health. And that’s what it’s all about.

In February 1991, a meeting in the Black Hills of South Dakota, hosted by the Native American Fish and Wildlife Society, brought Native people from all four directions, as is traditional, to talk about a topic that concerned them all.

How can Indian tribes with experience raising buffalo help other tribes restore buffalo to their lands? Why is this important to us?

15 Facts About Our National Mammal: The American Bison

The American Bison was named the national mammal of the United States on May 9, 2016. This majestic animal joins the ranks of the Bald Eagle as the official symbol of our country—and much like the eagle, it’s one of the greatest conservation success stories of all time.
In prehistoric times, millions of bison roamed North America—from the forests of Alaska and the grasslands of Mexico to Nevada’s Great Basin and the eastern Appalachian Mountains. But by the late 1800s, there were only a few hundred bison left in the United States after European settlers pushed west, reducing the animal’s habitat and hunting the bison to near extinction. Had it not been for a few private individuals working with tribes, states and the Interior Department, the bison would be extinct today.

Wallbanger, a formidable sprinting buffalo seen on racetracks of the 1980’s and ‘90s across America, Canada and Mexico, here ridden to a win by his owner and trainer Collin ‘TC’ Thorstenson.[/caption]

Harvey was an orphan buffalo who thought he was a horse, according to his owner, trainer and jockey Collin ‘TC’ Thorstenson and many fascinated spectators who watched him race.

Thorstenson said he was raised on a Sioux Indian reservation in the hills of North Dakota, was always fond of animals and trained small pets as a youngster.

He drove coal trucks in Wyoming and became a jockey and trainer.

Harvey’s story began in 1980 when his mother was shot by a poacher.

We’ve reported stories to you in this space about the early days of hard-riding buffalo wranglers running half-wild buffalo. Some amusing. Some tragic.

Often, they rounded-up and stampeded buffalo into makeshift corrals and loaded them into boxcars in some of the roughest ways possible, even dragging them at the end of several ropes.

At the time, it seemed to men who were used to working cattle like the only way to get the job done was to run the buffalo hard, and stay ahead of them.

In our BLOG of June 23, 2020, we published “American Serengeti—What is going on in Montana?,” which discusses the enormous wildlife project that is shaking the foundations of community development and progress in Phillips County, Montana, and Malta, its county seat, and nearby communities.
The American Prairie Reserve—APR, or simply the Prairie Reserve–on the upper Missouri River is a plan to develop a huge grazing unit—the largest nature reserve in the continental United States.

If you’re a traveler coming into the Hettinger-Lemmon area from the east or west, you will likely plan to complete your tour by visiting Sites 9 and 10 either before or after the main section of your tour.

Otherwise, separate trips might take you through Fort Yates and Jamestown—which are somewhat to the northeast.

Tribal herds can be viewed at Ft. Yates, and other reservations. The “largest buffalo,” and a National Buffalo Museum that includes a full-body mount of the famed White Cloud reside in Jamestown.

At the center of the Northern Plains is a rugged section of Badlands, buttes and fertile grasslands, where buffalo, cattle and sheep graze, and deer and antelope still roam.

We’d love to have you join us on the 10-site tour we’ve put together of the last great hunts and other historic and contemporary buffalo events, each clearly marked by a yellow sign.

These sites include three of the last great buffalo hunts, including the valley of the last stand—the final harvest of the last 1,200 wild buffalo by Sitting Bull and his band on October 12 and 13, 1883.

At the center of these events are previously untold stories and authentic, unspoiled places to envision where they took place.

This region, bordered by the North Dakota towns of Hettinger, Reeder and Scranton, and the South Dakota towns of Lemmon, Bison and Buffalo, is where Native people conducted the last traditional hunts of the majestic wild buffalo that once roamed here in huge herds on what was then the Great Sioux Reservation.

The most famous white buffalo that ever lived was probably Big Medicine, born in 1933 on the National Bison Range in Western Montana.

Soon after birth he was dubbed “Big Medicine” by the local Salish, Pend d’Oreille and Kootenai people of the Flathead Valley. He lived there all of his 26 years.

White buffalo are sacred to many Native American tribes and they believed he brought good news and supernatural powers. The Blackfeet tribe farther east also considered him the property of the sun as well as “good medicine.”

The Sad Demise of Sir Donald

In 1907 Canada purchased the Pablo Buffalo Herd from the western plains of Montana. Banff received 77 of these animals, and a new paddock of 300 acres was built north of the railroad to hold the increasing herd.

Sir Donald was a handsome bull. It was said he represented well the ideal that Native hunters preferred—a bull with well-built forequarters and large head. 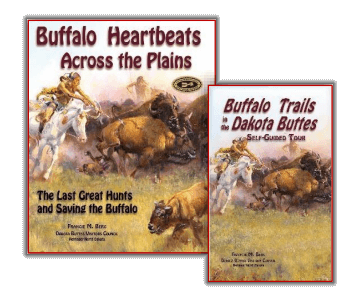