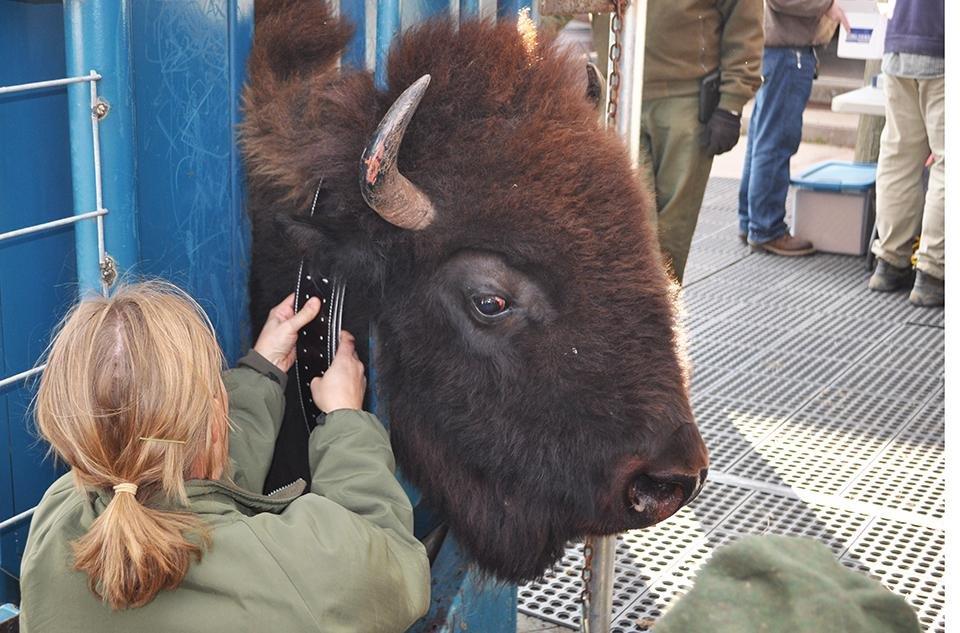 Researchers fit tracking collars on 10 bison at Wind Cave to make it easy to follow them and study how they use the land. NPS photo.

Collars placed on ten bison at Wind Cave National Park in South Dakota are making it easier for researchers, and eventually even the public, to follow them as they roam throughout the park.

“Bison research using these types of collars has never been done here before, and we’re excited about the information we’ll learn,” said Wind Cave Superintendent Vidal Dávila. “We’d like to thank the Black Hills Parks and Forests Association for funding the collars through their Adopt a Bison program.”

During the recent capture operation, 343 bison were brought into the corral and 127, mostly yearlings and two-year-olds, were removed from the herd with The Nature Conservancy receiving 93 excess bison and relocating them to preserves in four states (Broken Kettle, Iowa; Nachusa Prairie, Illinois; Dunn Ranch, Missouri; and Smokey Valley Ranch, Kansas City).
Through the coordination of the InterTribal Buffalo Council (ITBC), the remaining 34 animals will go to three tribes (Prairie Island Mdewakanton, MN; Flandreau Santee Sioux, SD; Red Lake Band of Chippewa Indians, MN). Over the years, working with ITBC has helped restore bison to many of their native homelands.
(NPS Press Release, October 30th, 2019.)