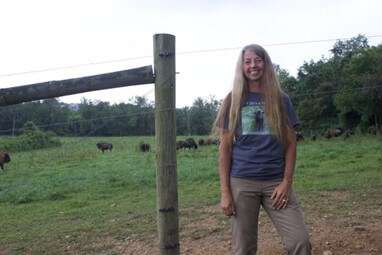 In 2005, Carie Starr had a life-changing meal. At that time, she was living on 25 acres of her family’s land, in Thornville, Ohio.

Her grandparents originally owned that land as part of their 160-acre farm. They enjoyed harness racing and had most of the farm in hay production. They also kept a few other animals, like goats and cattle, over the years. Starr grew up around the farm and her grandparents, but never had any plans to be a farmer.

But near the end of 2005, she had dinner at Ted’s Montana Grill, a restaurant in Columbus, to celebrate getting a new job. She wanted to try something new and adventurous, so she ordered bison prime rib.

“I was like, ‘Oh my gosh, that’s the most delicious thing I’ve ever eaten. I’d like to be able to eat that all the time’ … Well, I live in the middle of 25 acres. I could raise bison,” she said.

She really never thought it would happen. Bison are expensive. She was a single mom at the time, and had recently gotten out of an unhappy relationship. But the idea stuck with her. It was something she read about and thought about to take her mind off of things when she wasn’t happy.

“It was just kind of a fun little fantasy,” she said. 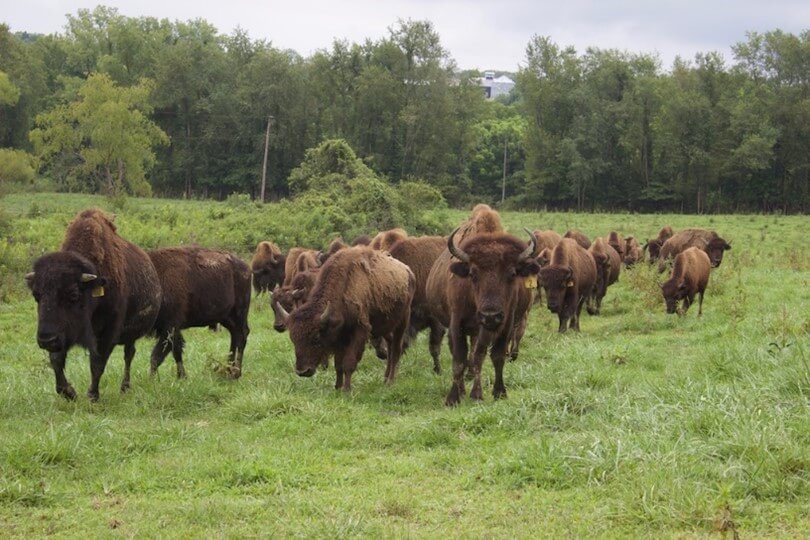 Starr uses rotational grazing for her herd. She puts some hay bales out for the cattle, and is starting to experiment with “hay bombing” in the pastures. That involves unrolling hay bales on sections of the pasture where animals have eaten most of the grass.

The bison eat the hay, and whatever they don’t eat gets trampled into the ground. Because the bison are eating there, they also fertilize the ground there, and eventually, the seeds from the hay bale grow into more grass to replace the grass the animals overgrazed.

But another part of managing the farm is knowing which land is better kept out of pasture. Brushy fence rows around the farm provide habitat for pollinators, birds and other wildlife. Starr also keeps an area near the back of the property, where several small streams run, in more butterfly and pollinator habitat.

“If you cram every square inch of your property into production agriculture, there’s no room for those things,” Starr said.

Starr’s grandmother influenced the way she farms, Starr said. She always shared her love for nature and her Cherokee heritage with her family, and was careful to take good care of the land.

“You grow up like that, and you learn to appreciate those kind of things.”

Starr sells most of her bison by the cut from her on-farm store. She also supplies a few small grocery stores and markets, including the Native American Indian Center of Central Ohio’s food truck in Columbus, with wholesale bison and occasionally sells halves or quarters to customers.

Areas like Columbus tend to have more potential customers who want to and can afford to buy bison meat. She started going to farmers markets to build up her customer base in 2008. By 2010, she didn’t have enough bison to meet the demand at the market, so she switched to selling from the farm.

In 2017, she expanded the herd, so she went back to farmers markets for a little while to help build up her customer base again. She’s also gained a lot of customers through posting about her bison on social media.

Starr also welcomes people to the farm with tours, and with camping sites on the property. She and her husband added a tipi to the farm in 2021 for camping, and immediately had bookings. They added a second this year.

They put the tipis on the part of the property that has several streams running through it. It’s an area where she always enjoyed hanging out, and she thought it might be a good place for camping.

“We have that area and like I mentioned, it’s not really good for pasturing,” she said. But it does have an abundance of native plants, pollinators and birds for campers to see. “I think it’s important that people come out and they see that kind of thing. It makes people appreciate nature more.”

Reporter Sarah Donaldson is a former 4-Her and Mount Union graduate from Columbiana County, Ohio, 800-837-3419 or sarah@farmanddairy.com.