Buffalo Stories of the Northern Plains

Here’s a remarkable buffalo story—one of my favorites—told by an army surgeon on the Plains way back in buffalo hunting days.

One day the surgeon was out buffalo hunting. As he headed back to the military camp he saw what he described as “The curious action of a little knot of 6 or 8 buffalo.”

Riding closer behind some rocks, he saw that the buffalo were all bulls, standing in a tight circle with their massive heads facing out, snorting and pawing dirt.

Around them danced a dozen large gray wolves licking their chops in impatient expectancy of a tender meal. 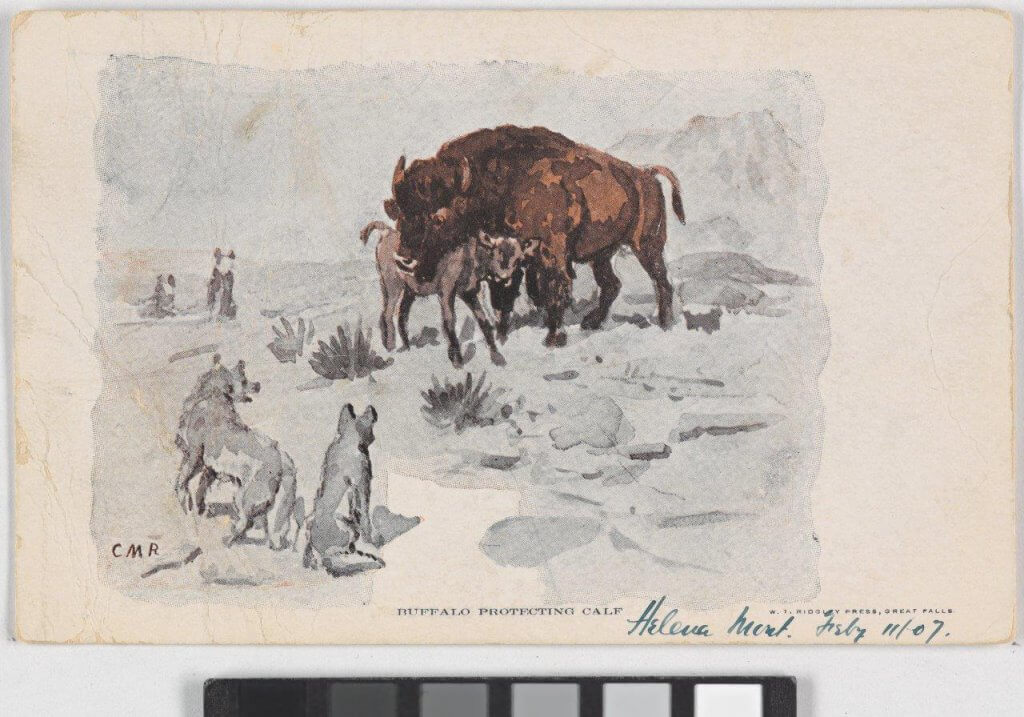 Large gray wolves danced around the circle of bulls in impatient expectancy, licking their chops, while the bulls faced them, snorting and pawing dirt. Sketch by C.M. Russell, Courtesy of Amon Carter Museum.

After a few moments the knot broke up, still keeping a compact mass, and started off for the main herd, a half mile away.

Then to his very great astonishment, the surgeon saw what the bulls were protecting—a newborn calf on wobbly legs in their midst.

The calf stumbled 50 paces or so, then fell down.

The bulls again formed their protective circle around the newborn, shaking their heads fiercely.

Disappointed, the hungry wolves sat back down and licked their chops.

Again the calf got up and struggled on, well protected on every side by the bulls.

After watching this drama play out a few times—the calf struggling ahead, falling, the bulls tightening their circle, pawing dust and tossing wolves with their horns when they dove in too close—the surgeon rode on.

While the Army surgeon watched, the buffalo bulls protected one small newborn calf until he was strong enough to catch up with the herd. Photo courtesy of National Park Service.

Telling the story later, he said, “I have no doubt the Noble Fathers did their whole duty by their offspring and carried it safely to the herd.”

As reported by William Hornaday in his book “The Extermination of the American Bison,” printed by the US Government in 1889. Told by Francie M. Berg, Apr 28, 2020.

Noble Fathers We Saw in Action 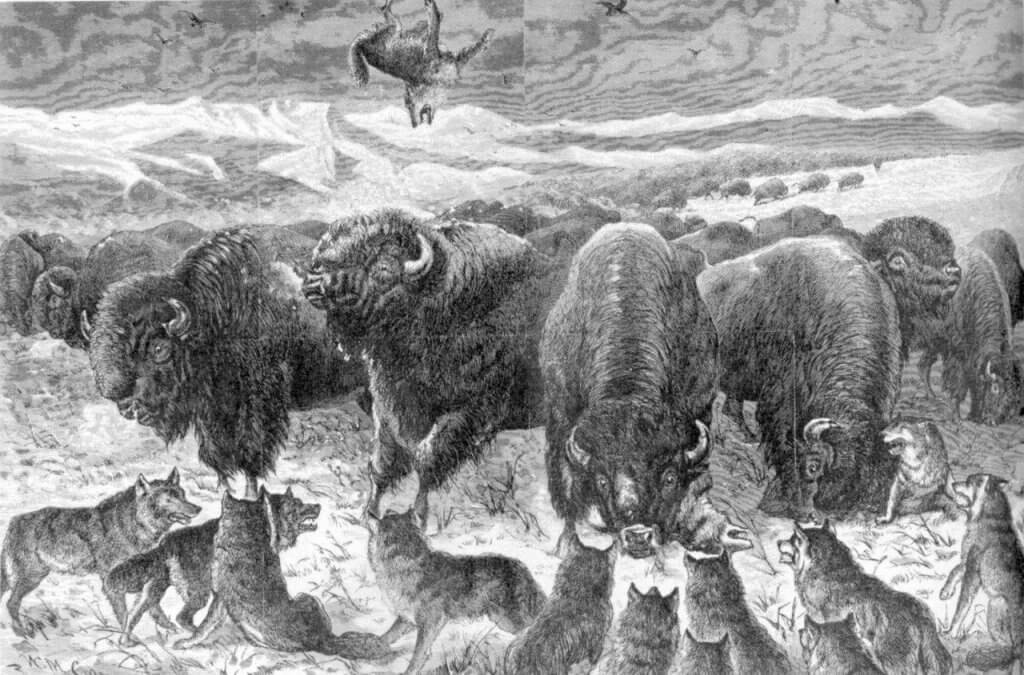 Buffalo bulls grow up with a strong sense of responsibility.

The “noble fathers,” as they’ve been called in earlier times, for protecting mothers and calves from the ravages of wolves. In blizzards and fierce storms, it was said, they form a triangle facing into the wind and shield the calves and cows from wintery blasts.

We were riding in the North Unit of Teddy Roosevelt Park in North Dakota with a group of family friends.

Our kids were teenagers then and we were about 15 riders. We came riding over a hill and suddenly saw below us—spread out and grazing—a herd of about 60 buffalo.

They looked up, startled by the sudden appearance of so many riders, and started to run. We pulled in our horses and paused to watch.

They didn’t run far. The big bulls stopped in an open area below and formed a tight circle facing us, shaking their massive heads, while cows and calves took the inside.

It was clearly a defensive position they all understood—and so did we—the calves well-hidden and protected with their moms, and the bulls ready and eager to take us on.

Describing a similar defense of bulls in the 19th century buffalo herd, Colonel R.I. Dodge, wrote in his Plains of the Great West:

“The bulls with heads erect, tails cocked in air, nostrils expanded and eyes that seem to flash fire, walk uneasily to and fro, menacing the intruder by pawing the earth and tossing their huge heads.”

We paused and watched the amazing bulls for awhile, charmed to think that for over 100 years this herd and their ancestors had lived safely inside the national park—without any large enemies to fear.

Yet this generation of noble fathers stood ready and willing to fight us off and protect with their lives the young calves and their mothers, just as dozens of observers described their response to wolves and other threats long ago.

No hungry wolves would have broken through their defenses that day!

Neither wolves nor grizzly bears would have stood a chance.

We skirted far around the herd and let the ‘noble fathers’ think they had successfully stood off our attack. It was quite impressive!

In another unusual rescue, a Blackfoot Native American reported seeing a buffalo bull charge a grizzly bear that attacked a heifer.

The grizzly bear was lying in wait, hidden by a trail into a creek, when a small bunch of buffalo trailed down to drink. Led by a young buffalo heifer, they came down the bank in single file.

As the heifer passed under the clay shelf where the grizzly was hiding, he reached down with both paws and caught her around the neck, then leaped on her back. She squealed for help and struggled to escape.

Suddenly a “splendid young buffalo bull” came rushing down the trail and charged the bear, knocking him down.

They fought fiercely. The grizzly tried to grasp the bull by the head and shoulders, but could not hold him. The bull slashed furiously with his heavy horns.

Blood gushing from mortal wounds, the bear finally tried to escape, but the bull would not let him go. He kept up the attack until he finally had killed the bear.

Even then he continued to gore and toss the bear carcass up off the ground. The bull seemed insane with rage.

The Blackfoot hunter—who was also hiding near the trail—was afraid he’d be discovered and attacked too.

Finally, much to the hunter’s relief, the buffalo left the carcass and went off to join his band.