Earthlodges at On-A-Slant village on a rise above the Missouri River and near present-day city of Mandan ND. (ND Tourism, JL 217-5)

North Dakota Studies at the State Historical Society of ND has recently revamped its units on “American Indians of North Dakota.” Well done!!

We plan to cover the highlights of this topic during the next year—especially for our American History teachers–first with grades 4 and 8 in ND and then adding information from other states. We won’t give you the entire load at once—but probably will keep feeding it out as we go through the year.

It’s a solid topic because we have several native tribes in North Dakota. They have many cultures, many languages, many different histories. Through it all there were numerous disasters and tragedies, also many times to honor and celebrate. Yet the authors have given their subjects an even-handed treatment—the situation is as it is. It’s a good place to start.

Those of us who have come here more recently need to understand the long Native American perspective and help them to celebrate their cultures and history.

It’s important to realize that in our earliest human history the many tribes of the US and Canada took care of their own for hundreds and thousands of years. They were independent and survived solely by their own efforts, yet in many ways they relied on each other and on the buffalo.

Regarded as relatives, the Buffalo were vitally important to their culture and survival from the beginning. furnishing them with food, clothing, shelter and much, much more. Is it any wonder that the buffalo became a vital part of their culture? That losing them was a disaster that is being healed even now as tribes return buffalo to their lands?

These are topics covered in the state educational units, which we’ll share with you:

Tribes and Reservations of North Dakota

Culture of the American Indians of North Dakota

What do We Call the Early People? 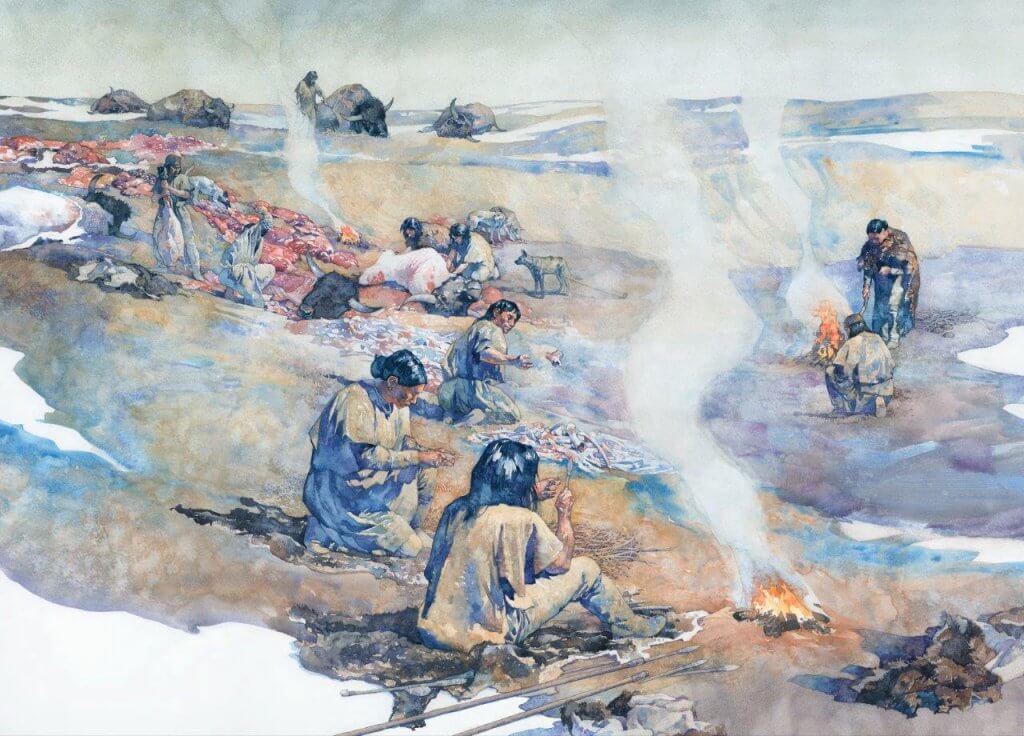 Early American Indians hunted bison on a winter day in North Dakota. They took the meat back to their camp, probably hauling it with dog travois. Women dried meat on willow racks and stretched and pegged down the hides on the ground to dry. (State Historical Society of North Dakota)

The story of Columbus tells us that when he landed in North America, he thought he was in India, so he called the people living here “Indians.” This was confusing because people who live in India are also called “Indians.”

In order to avoid confusion, the native people of North America were often called “American Indians.”

In the 1970s, the government and some other groups began calling the American Indians “Native Americans.” People are called natives if they are born in a certain place or country, so actually, anyone born in America could be called a native American. If “Native” is capitalized, it refers to American Indians.

A survey in 1996 found that most American Indians preferred to be called “American Indian” rather than “Native American,” although many did not care one way or the other. The best way to refer to American Indians, however, is by their tribes.

People from Norway, Germany and other countries on the continent of Europe are all called Europeans, but they have different histories, languages and cultures. In the same way American Indian tribes each have their own history, language and culture that are different from those of other tribes.

It is most respectful to use the names of the tribes when known, but no matter what terms are used, the greatest possible respect is intended for the people who are featured in this unit.

The different tribes each have their own rules of defining who is an Indian of their tribe, but many people who consider themselves to be Indians are not members of any tribe.

The Bureau of Indian Affairs defines an Indian as anyone who states that he or she is an Indian. People who call themselves American Indians share a feeling of belonging to a special group that non-Indians cannot really understand.

A large group of people in an area who are organized under one government is called a nation. A government is an organization of people that makes rules and laws for the nation.

The continent of North America contains three large sovereign (sov-er-ren) nations—Canada, the United States and Mexico. When a nation is sovereign, it means that it can govern itself. People who are members of a nation are called citizens of that nation.

Before Europeans came to North America, there were more than 300 nations in what is now the United States. The citizens of these nations were American Indians. Each nation, called a tribe, was sovereign and had its own government.

When Europeans began moving to North America, they settled on land where American Indian families had lived for hundreds of years. The Indians did not want to move, but the government sent its army and forced the Indians to move to reservations. 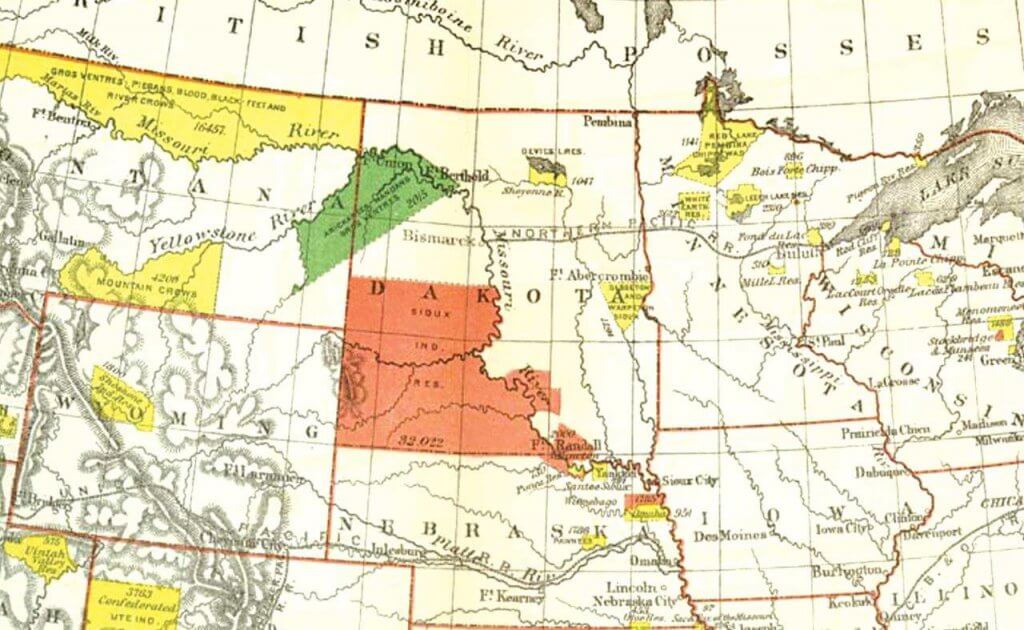 In order to keep peace, get more land and obtain other benefits, the US government made treaties with the different Indian tribes. Even though many promises made in the treaties were broken by the US government, the tribes were able to keep their positions as sovereign nations within the United States.

This means that each tribe is sovereign but is associated with the United States. Tribal members are citizens of two nations—the United States and their own tribal nation.

The state in which the tribe is located does not have authority over the tribe. The tribe has power over everything within the tribe and the state government cannot interfere. The tribal chair (chief) of each tribe is equal in rank to the governor of each state.

Each tribe is headquartered on a reservation and the laws of the tribe apply within the boundaries of the reservation. Tribal laws affect hunting, fishing and water rights on most reservation land. The sovereignty of the Indian tribes is not affected by state laws.

Many Indian tribes have lived in North Dakota at different times, but today North Dakota has 5 nations, or tribes, located within its borders. They are:
(1) The Three Affiliated Tribes;
(2) Spirit Lake Nation;
(3) The Standing Rock Sioux Tribe;
(4) The Sisseton-Wahpeton Sioux Tribe; and
(5) The Turtle Mountain Band of Chippewa.

American Indians were the first people to live in North Dakota. We know a little about the earliest people because their stone tools, such as spear points, can be found where they left them. The tools they used tell us what era they lived in. An era is a time period that lasted thousands of years.

When Europeans “discovered” America in the 1400s and 1500s, people had already been living on this continent for thousands of years and had hundreds of different languages and cultures.

Archaeologists (ar-key-ol-a-gists) believe that the first people to arrive in North America came from the continent of Asia over 15,000 years ago. These prehistoric people were probably big-game hunters who were following herds of large animals, such as mastodons, woolly mammoths and giant bison. North America and Asia are separated by water, so how were people able to travel from Asia to North America by land?

During the “Ice Age,” glaciers (gigantic sheets of ice) contained so much water that the ocean levels were much lower than they are now. Dry land made up many of the areas that are now under water.

Glaciologists (glay-see-ol-a-jists) (scientists who study glaciers) believe that from about 25,000 years ago to about 10,000 years ago, the Bering Strait was a land bridge that may have been 1,000 miles wide. Animals and people could have easily made their way from Asia to North America across this wide strip of land. 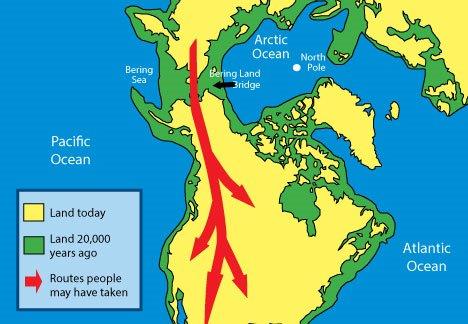 These early ancestors of the American Indians are called Paleo-Indians. “Paleo” means ancient (very old). After reaching North America, the Paleo-Indians probably continued making their way south from Alaska either along the Pacific coast or along an ice-free area east of the Rocky Mountains.

They may have lived on the southern side of the Wisconsinan glacier and moved north as the glacier receded (went back).

With the changes in climate that happened over thousands of years, vegetation (plant life) also changed and the mastodons, woolly mammoths and other prehistoric animals became extinct. The people adapted to the changes and their population increased. Archaeologists do not know very much about the Paleo-Indians because they existed many thousands of years ago and little evidence of them remains. 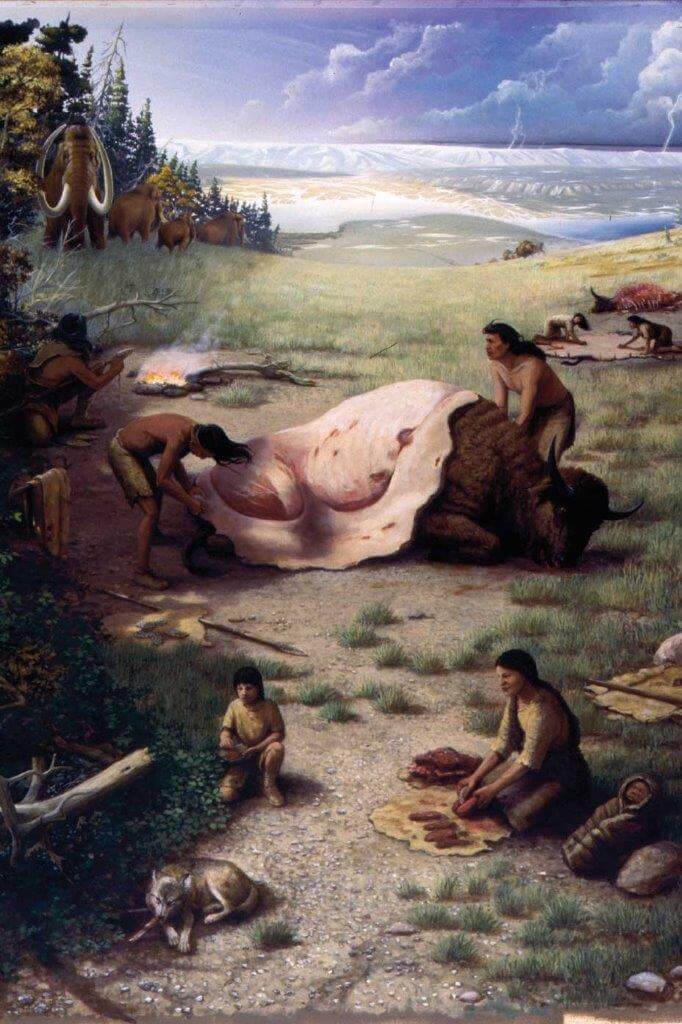 Paleo-Indians butchering a giant bison at the end of the Ice Age while a mammoth looks on. (SHSND 1996.25.1)

The Archaic era began about 7,500 years ago. The changes in climate led to changes in plants and animals. The Archaic (ar-kay-ik) was a new era because people made different spear points and used new tools. Some animals became extinct. Some animals, such as Buffalo (sometimes called bison), became smaller. People of the Archaic era adapted to these changes.

People of the Archaic era were the descendants of the people who lived in the Paleo-Indian era. As their population increased, the people continued spreading throughout the continents of both North America and South America. They lived in small bands, or groups, and continued their nomadic way of life following herds of game animals and gathering plants for food.

This ancient bison skull was found near New Town ND. The skull has a horn span of seven feet. The skull is exhibited at the North Dakota Heritage Center & State Museum in Bismarck ND. (SHSND 98-44.1)

Archaeologists have found remains of the Archaic people’s culture scattered throughout the plains. A hard stone called flint was mined by people along the Knife River in North Dakota.

Spear points made of this flint were used by hunters in North Dakota and were also traded to people in other areas. Evidence of the use of flint has also been dated back to the time of the Paleo-Indians.

The atlatl (at-lat-ul) was developed for hunting by the Archaic people. This weapon was a stick with a handle on one end and a hook on the other end. With the atlatl, hunters could throw darts much harder and farther than they could throw a spear.

People of the Archaic era made knives, hammers, scrapers and other tools from flint or animal bones.  Many of these stone and bone tools have been found in sites of ancient peoples’ activities in North Dakota.

Black Elk: The Circle of Life 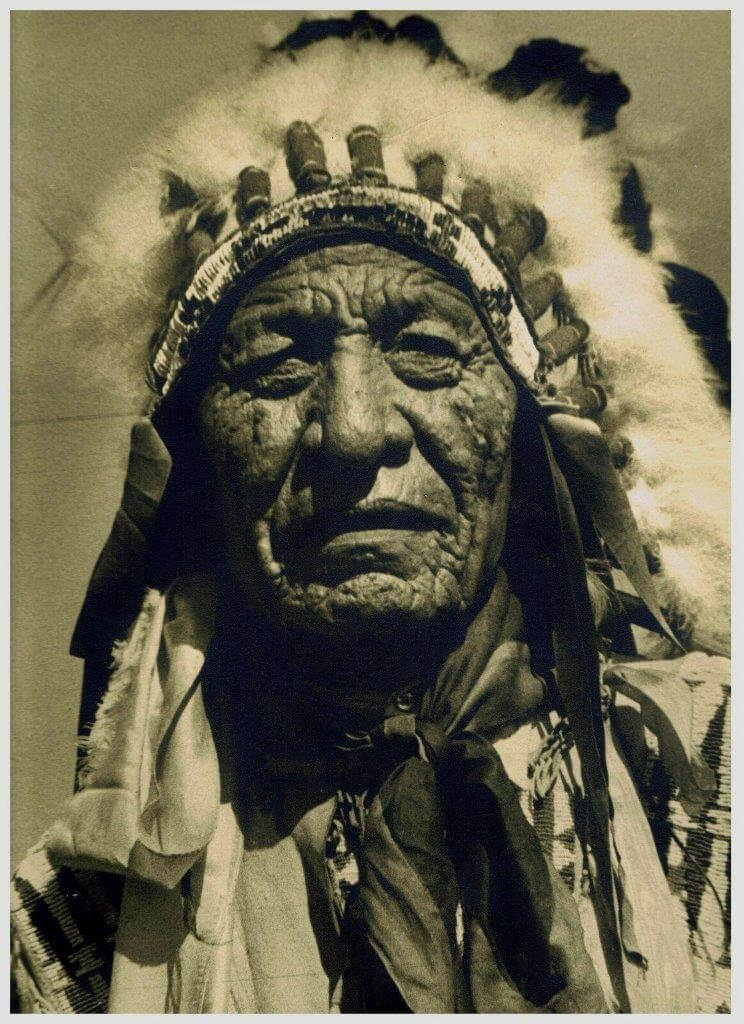 Black Elk in 1940. Black Elk, an Oglala Lakota medicine man, is best known for his interviews with John Neihardt, during which he talked of his religious views, visions and life events. Neihardt published these in his book Black Elk Speaks in 1932.

“You have noticed that everything an Indian does is in a circle and that is because the Power of the World always works in circles and everything tries to be round . . . The sky is round and I have heard that the earth is round like a ball and so are all the stars.

“The wind in its greatest power whirls. Birds make their nests in circles, for theirs is the same religion as ours . . . Even the seasons form a great circle in their changing and always come back again to where they were.

“The life of a man is a circle from childhood to childhood and so it is in everything where power moves.” –Black Elk, Oglala Lakota Sioux