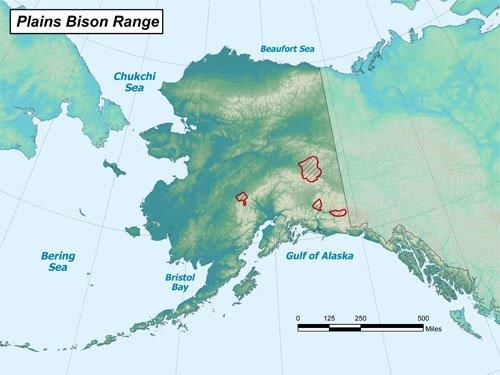 Kurt Schmidt heard the bison hooves smack on the car before he saw what happened.

He’d been driving home from work on a small road near his Delta Junction home on a dark January night when he saw a herd of bison ahead. On the other side of the herd, a small car was also waiting to pass the animals.

Schmidt said he stopped his pickup truck and waited. Suddenly, the herd turned around and ran. Several of the huge animals stumbled over the car.

“I don’t think they intended to run over it,” he said. “They pretty much ran into it, slid up the hood and ran up over the top.”

The car’s driver moved forward quickly after the incident, and Schmidt could see hoof marks on the dashboard less than a foot from the steering wheel. The event could have been a lot worse.

Deep snow this winter has caused more bison to move onto plowed roadways in the Delta Junction area, said Bob Schmidt, a wildlife biologist for the Alaska Department of Fish and Game.

“The animals don’t want to get off the plowed roadways because it’s so hard on them,” he said. “It’s chest-deep snow and it’s cutting up their legs and so they’re using the roadways as travel corridors.”

And more animals on the road has led to an increased number of collisions with vehicles. This year at least nine bison have died after being struck by cars. By comparison, only a couple usually die that way each year, Schmidt said.

The crashes haven’t resulted in any injuries to people, but some vehicles have been significantly damaged, said Austin McDaniel, communications director for the Alaska State Troopers. An adult plains bison can weigh up to 2,000 pounds.

Dodi Wontorski was riding in the passenger seat of her Chevy pickup two weeks ago after she’d picked up her boyfriend at the airport. They were headed home to Tok around 8 or 9 p.m. when Wontorski saw a herd of bison in front of them on the road. By then, it was too late to stop.

“He slammed on the brakes and he was able to at least move the truck toward the smaller ones — the big ones were huge,” she said. “And I thought for sure we were going to die.”

The truck crash injured several bison, she said. The front of the truck crumpled on impact — Wontorski said it’s totaled.

A trooper dispatched two of the bison, Wontorski said.

Had they been in a smaller vehicle or driving fast, the situation would have been much worse, Wontorski said.

It’s normal for bison to cross the Alaska Highway each year, said Schmidt, the wildlife biologist, because they move south toward calving grounds in the spring and summer. But bison usually steer clear of humans and roads, he said.

“But now they’re not off the road for hours or even a day or more,” Bob Schmidt said. “They just want to hang out right on the road.”

Kurt Schmidt (no relation to the biologist) said it’s become routine since January for him to run into herds of bison sleeping on or walking along the road. 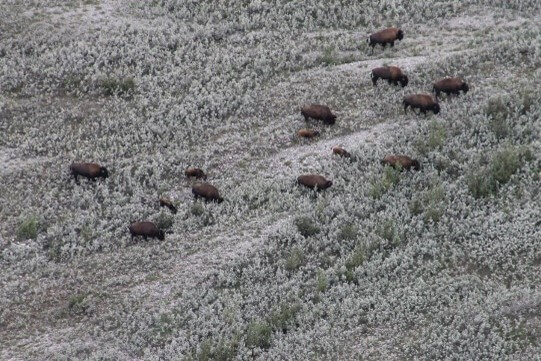 Plains bison in the Delta River floodplain in 2015. (Alaska Department of Fish and Game)

Bison activity in recent months has been centered on a roughly 20-mile section of the Alaska Highway east of Delta Junction, Bob Schmidt said. The Delta Junction Bison Range is a 9,000-acre protected area about 12 miles southeast of the town, established by the Legislature in 1979 as a place for the herd of several hundred animals to range in winter without damaging agriculture.

This winter, some bison have turned to farmers’ fields because it has been so difficult for them to access forage buried under the snow. There’s a layer of ice up to 2 inches thick within the snowpack that has further complicated foraging.

“Bison are resourceful animals and have stomped out areas in hayfields to get through the ice layer to grasses below,” Clint Cooper, a Fish and Game technician, said in a statement. “However, many of those fields are owned by local farmers, who don’t appreciate the bison’s resourcefulness.”

In hopes of drawing bison away from farms and roads, bulldozer crews from Fish and Game and the Alaska Division of Forestry have been clearing snow from more than 30 miles of trails in the last few months to provide room for the animals to travel and access forage. About 200 acres of fields were also cleared.

Officials said the plan has been working: During a flight in February, biologists saw 70 bison using the fields and trails.

Bob Schmidt said it’s important to give bison a wide berth and allow them to find a space to get off the road.

And one of the most important things is just to drive slowly. Bison are most active at night and can be difficult to see.

“I’m afraid that I’m going to hit one,” Kurt Schmidt said. “I can only see so far and those things at night — they reflect no light whatsoever. So usually, if you’re going 60 when you see them, it’s too late. If they’re in your path you’re going to hit them.”