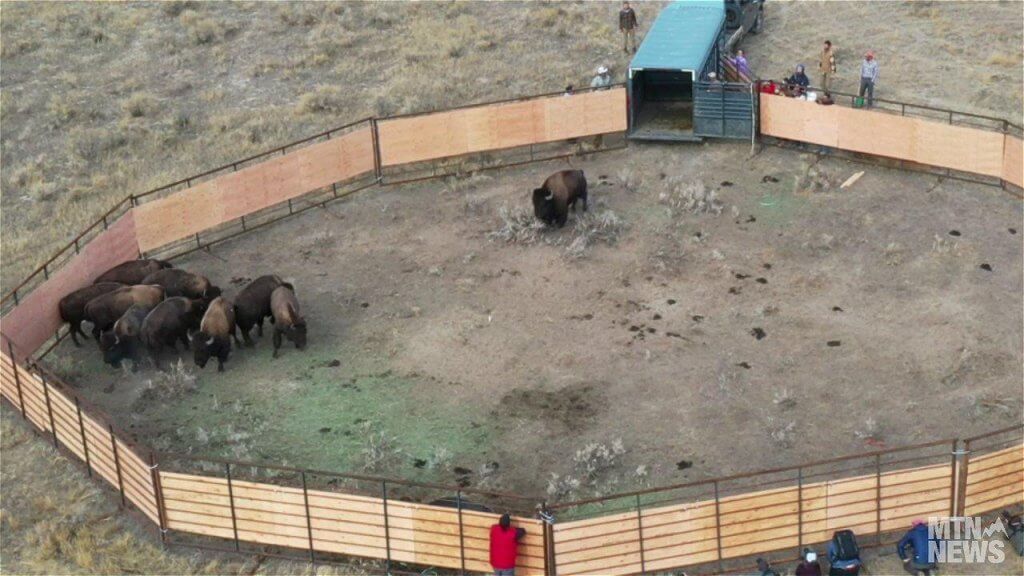 Eleven Buffalo arrive on Rocky Boy Reservation as the start of a new herd. Chippewa Cree people gathered to welcome them.

BOX ELDER — Jason Belcourt said he teared up when the first of 11 buffalo arrived at the Rocky Boy reservation on Sunday night as part of an effort to reintroduce bison on the reservation, which have been absent from the land since the late 1990s.

“He jumped off the trailer went into the round pen, pawed and sniffed at the ground, and looked up at me,” he said. “It was a pretty powerful moment. That’s when I knew we did what we needed to do.”

Belcourt, the Chippewa Cree tribal sustainability coordinator, has been working with the tribe’s buffalo board and council, the Confederated Salish and Kootenai Tribes and the American Prairie Reserve for two years to establish a buffalo herd on the reservation.

The efforts came to fruition on Tuesday when hundreds of people gathered on the reservation and clung to the fence of the 1,200-acre pasture in anticipation of the bisons’ arrival. 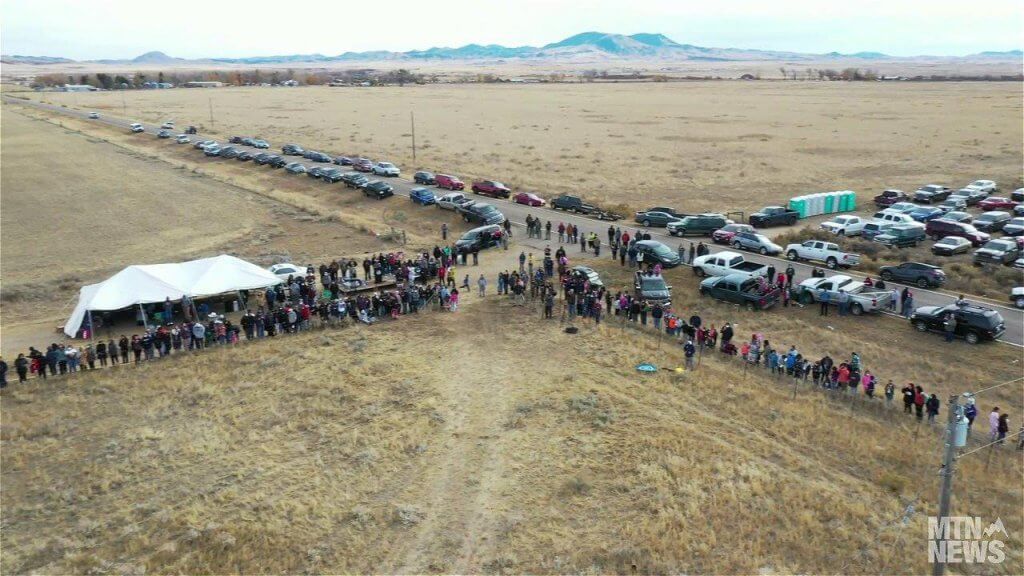 Hundreds of people gathered on the reservation and clung to the fence of the 1,200-acre pasture waiting for the buffalo arrival.

With local drum group the Montana Cree playing in the background, people cheered as the 11 bison — six from APR and five from the CSKT — bolted from a holding pen and trampled out into their new home. The 2.5 to 3.5-year-old bison became quickly acquainted in the pen. When the gate opened they paused for a moment before taking off into the distance.

As the bison ran off, Belcourt high-fived and hugged everyone around him, including Melvin Morsette Jr., chairman of the tribe’s buffalo board. 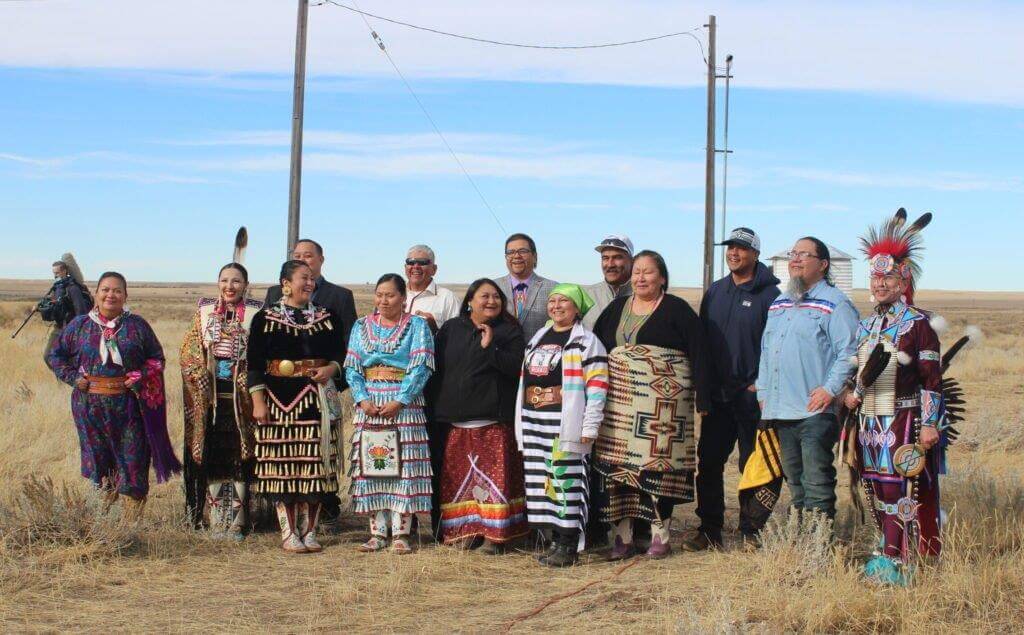 Chippewa Cree buffalo board and other leaders pose for a photo at the bison donation event.

The day’s activities began with a pipe ceremony conducted by tribal elders. Throughout the day tribal leaders gave speeches and dances were performed to the drumming by the Montana Cree.

“I can’t even put it into words,” he said. “It was just an emotionally charged day. Lots of hugs. Lots of thankfulness.”

After the bison disappeared into the horizon, a bald eagle — another significant animal in Native American culture — came into view soaring above.

“The eagle was just another good omen that we managed to do something really grand,” Belcourt said.

Two hundred years ago, roughly 30 million bison roamed North America from Central Canada to Mexico. Now, only an estimated 360,000 remain in the same area, with less than 10 percent living in conservation herds and the vast majority being raised for commercial purposes.

“It’s a healing thing to bring these animals back to where they once roamed in the thousands,” said Shannon Clairmont, a member of the Confederated Salish and Kootenai Tribes, who helped organize transferring six bison from CSKT to the Rocky Boy Reservation.

Clairmont said Montana tribes have long been pushing for the management of bison. In the 1800s, millions of bison were slaughtered by white settlers. Since then, CSKT and other tribal partners have worked with the U.S. Fish and Wildlife Service to restore the population.

The bison donated by CKST share the same genetics as those that roamed the land in the past, Clairmont said. “These bison here are relatives of the original bison here that were on the plains. It has been a long journey for them, but they’ve made it full circle.”

Senior Bison Restoration Manager for the American Prairie Reserve Scott Heidebrink was in attendance Tuesday. “This is amazing because most of the time, we’re supplementing into herds, and so actually being on the ground floor starting a herd is really special,” he said.

The prairie reserve started in 2005 aiming to bring back a bison population that had been absent from the landscape for more than 120 years. Now, it has a herd of 813 and has donated 404 to tribal and conservation herds.

Belcourt said he hopes the bison will help restore a sense of cultural pride for native youth.

“When you hear about a young person taking their life, I can’t help but think it’s from the trauma induced by efforts to strip of us of our culture,” he said. “This buffalo is going to remind us of our language, culture, and the teachings that we are not to hurt ourselves.”

Kids from Rocky Boy and Box Elder schools were bused in on Tuesday to witness the donation.

“It’s a historical event and I’m thankful for the kids to be able to witness it,” said Dustin Whitford, the tribe’s language preservation officer. But, he said, it’s not just about the bison.

“We can’t just preserve the existence of buffalo here; the language has to go along with it,” he said. “‘Pahskahmotos’ is the word we use for the Buffalo. And we consider it to be like a grandfather or grandmother. That’s how much we respect them.”

Of the 7,000 enrolled people, Whitford estimated there are only around 120 fluent speakers on the reservation, nearly all of which are elders. 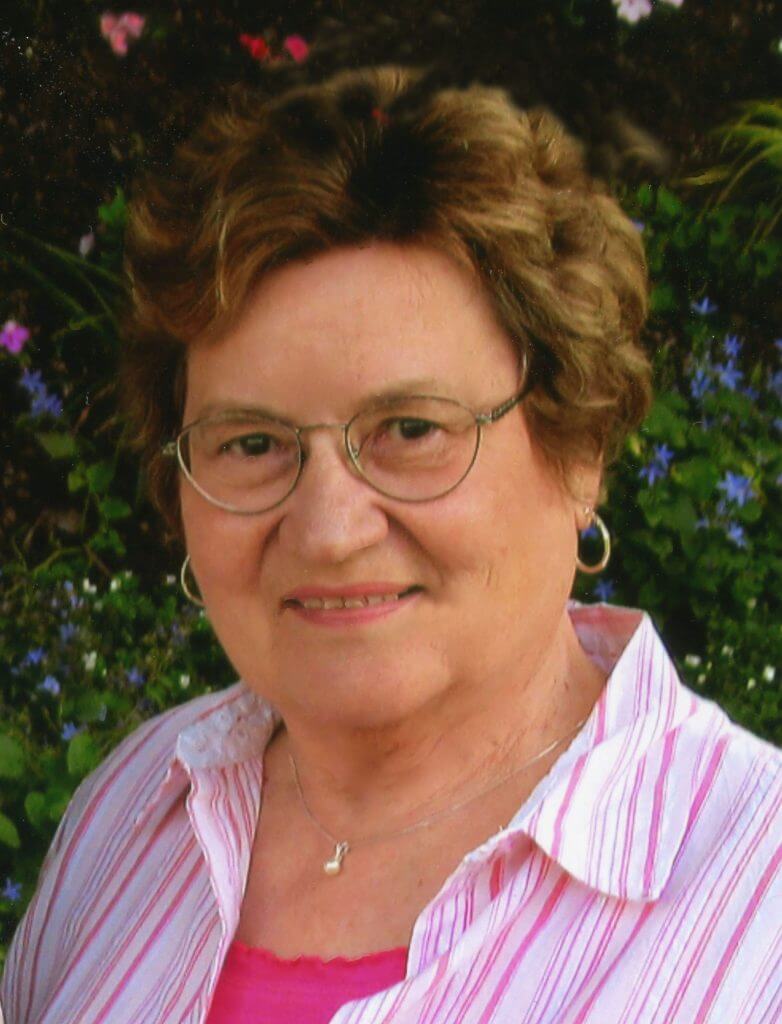