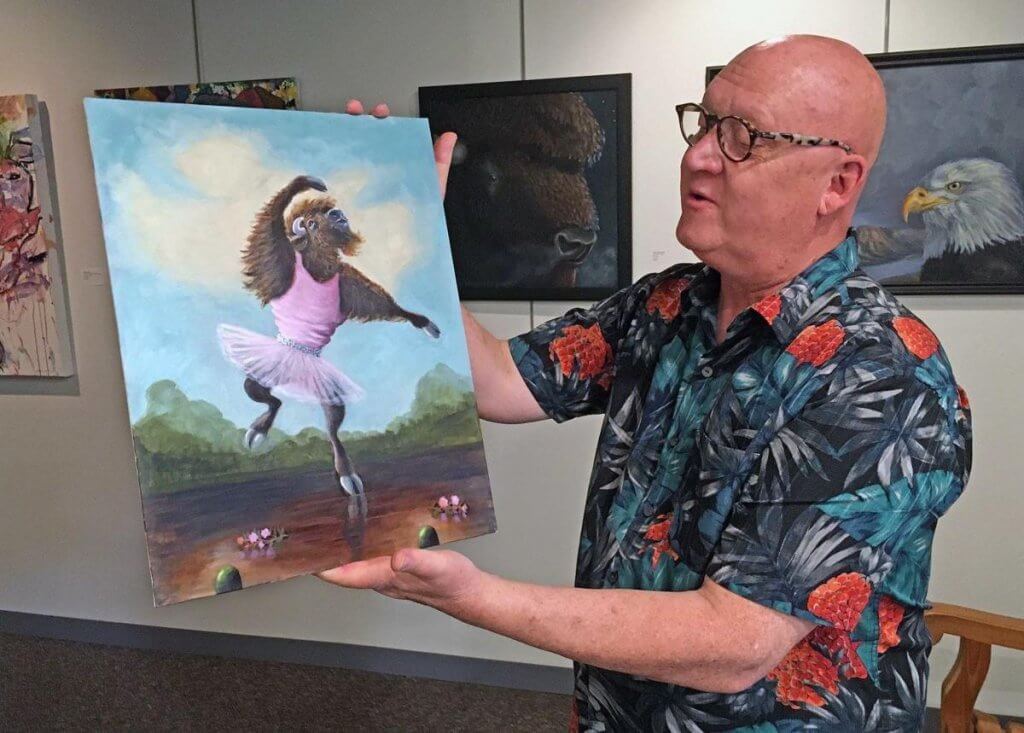 “One of the most remarkable displays we’ve ever had is the Bison Ballet Exhibit,” says David Borlaug, Co-Director of The Capital Gallery. “22 artists with 70 pieces.”

“Each, in their own way, expressing how these ‘Primas of the Plains,’ look though their mind’s eye,” adds co-director Marci Narum. “From highly detailed, representational paintings, to expressive or abstract, along with bronzes and other three-dimensional works, it’s a fascinating display.”

It’s true that when people think about North Dakota, one of the first things to come to mind is bison—or buffalo. They are an inspiration to many.

“No subject matter has been more popular. I mean, here we are on the Northern Plains. The monarch of the plains. But whether it’s realistic, expressive or abstract people love Bison,” said Borlaug.

Branches of The Capital Gallery are also in Fargo and Medora—in Medora at the Herald Schafer Heritage Center. Borlaug says after the show closes Oct 19, they will be restaging exhibits and moving art work back and forth between the three Galleries.

All items are for sale, and the Galleries also have gift shops. Open Monday through Saturday 10 am-5 pm. Sundays by appointment.

It’s the love for bison in the Peace Garden State that has artists like Linda Donlin wanting to take part in the show.

“We could go out to the Theodore Roosevelt National Park and see them and photograph them and appreciate the beauty and understand what they’ve meant to the people that came before us. And that for the people that will go ahead of us and still have them to appreciate,” explained Donlin.

Donlin’s knife painting method is seen in both of the pieces of art she has on display in the Bison Ballet.

In Spring Storm, she has a mother and her calf grazing in the Badlands, and in A Bison Rising, she chose to focus on the beauty of the animal.

“They have such beautiful, soulful eyes and I wanted to show this very majestic bison on a bluff and looking out and have this beautiful sunrise behind him. Then the name just came to me: A Bison Rising,” said Donlin.

The gallery is covered in one-of-a-kind renditions of the bison.

“From ceramic to bronze sculptures to clay and of course the myriad of canvasses,” explained Borlaug.

Borlaug says Bison Ballet also shows an array of artists from newcomers to familiar faces they’ve worked with in the past. (Credits to Bismarck Tribune and Nexstar Media, 2021.)