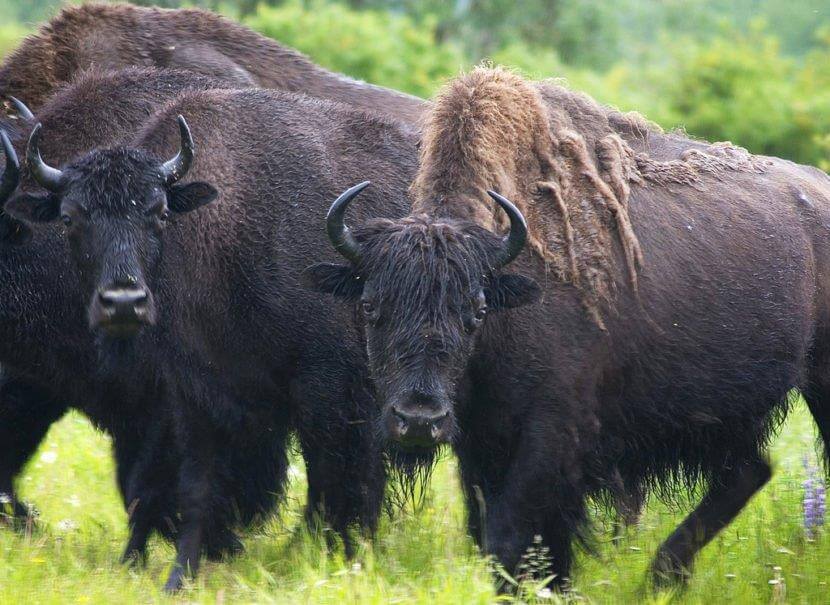 State biologists completed an annual survey of the Innoko-Yukon River wood bison population earlier this summer, and they say the results show the animals are doing well six years after a seed group of bison was released in the area.

Biologists counted 103 wood bison this summer — an increase of more than 10% from last year’s herd size. Twenty-six calves joined the herd this year — the most the herd has produced since it was established in 2015. The survey also showed that the animals are in better physical condition than in previous years.

Darren Bruning,  a regional wildlife conservation supervisor for the Alaska Department of Fish and Game, said the survey shows the bison are succeeding in the wild.

Bruning flew along in the plane that took photos for the count. He said seeing a thriving herd of wood bison in the Innoko-Yukon River area is a testament to members of the public who advocated for the reintroduction and Fish and Game.

“So to see them in the wild is almost indescribable. It’s extremely rewarding, and I feel good for everyone, knowing the bison are there,” he said.

According to Bruning, the herd’s success in the last year is related to weather. The population tends to decline when a layer of ice forms on top of the snow during spring rains. That barrier prevents bison from accessing the food they need, so fewer animals survive. That wasn’t the case this year, Bruning says.

“The bison probably had more consistent access to forage, which led to healthier cows that were carrying calves, and therefore more calves were born,” he said.

The wood bison were released onto the landscape in 2015 after years of planning. Ken Chase represented Grayling, Anvik, Shageluk and Holy Cross on the Alaska Wood Bison Management Planning Team. Chase said people who live in his area supported the reintroduction because they wanted to hunt the bison.

“We just wanted to see something positive done, you know, with our area, we have no oil development, we have no gas development and so we look to the food source instead,” he said.

Despite the herd’s success this year, biologists say it will be several years before there are enough animals to hunt. But Chase said local people are willing to be patient.

“The main thing is just to try to maintain the herd and let the animals get used to the environment and how to survive,” he said.

Chase hopes once the bison are available for hunting it will provide opportunities for local people. Residents could get involved in managing the bison. Hunters from out of state could bring revenue to the villages. Bison meat could be processed locally. Animals from the herd could be transported to other places to re-establish wild bison. But mostly, Chase wants his people to eat the meat themselves.