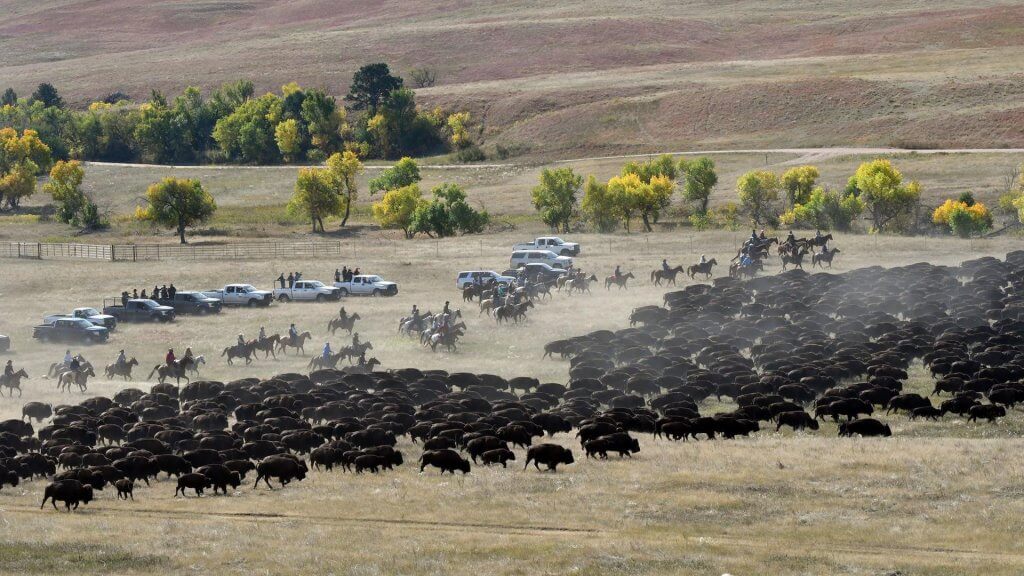 Over the decades, the Custer State Park roundup and auction grew in popularity, becoming the spectacle it is today. About 20,000 people show up every September to watch horseback riders herd bison into corrals. Credit Matt Gade.

The park will use the money to build the new center near the existing buffalo corrals. The center will educate visitors about the park’s bison herd, which numbers nearly 1,300.

Actually, the first additional $100,000 has already been pledged by Walter Panzirer, of Pierre. He’s one of the trustees of the Helmsley Charitable Trust. He’s also a grandson of the late Leona Helmsley, one of the trust’s namesakes.

“At the Helmsley Charitable Trust, we’re into rural healthcare,” Panzirer said. “That’s what we do for the seven upper Midwest states. And this, in my mind, ties to health. This encourages people to get out into the open—to get into the outdoors, enjoy the parks, be more physically active and be out here loving nature.”

Panzier told planners this will be a huge upgrade, “Picnic facilities and an interpretive center to tell the true story of the buffalo here. To tell why we are vaccinating buffalo, why the park manages the herds to such pristine levels as they do now. And really lay out the history that this was one of the five genetic lines that saved the buffalo in the United States.”

“We are excited to lead the funding effort to make the Custer State Park Bison Center possible,” said Walter Panzirer. “To help ensure the park’s educational opportunities reflect the grandeur of the park, Helmsley has made significant investments, providing funding for the Custer State Park Visitor Center and the Peter Norbeck Outdoor Education Center.”

The history of buffalo in the park began in 1914, when South Dakota bought 36 bison from Fort Pierre rancher Scotty Philip.

The park conducted roundups every few years in those early days to manage the herd’s size, and butchered the excess bison. Annual roundups began in the 1960s, and park officials started auctioning the surplus animals instead of sending them to slaughter.

PIERRE, S.D. — South Dakota’s legislature chipped in $500,000 during the recently completed legislative session for a bison interpretive center in Custer State Park, and state officials say plans for the structure are moving along briskly.

“Next week, we’ll get our first look at an interpretive design,” said Matthew Synder, Superintendent of CSP, speaking before the Game, Fish and Parks Commission’s regular meeting that convened last week. “Things are tracking really well.”

Snyder said he hopes to be “breaking ground” in June.

The bison center sprung from the mind of Helmsley Charitable Trust trustee Waltzer Panzirer, who worked on a Boy Scouts project in the park with his son, say park officials.

One question raised by Senate Minority Leader Troy Heinert, a Democrat and enrolled member of the Rosebud Sioux Tribe, during the debate on the legislature’s portion is whether or not the center would be “telling the correct story” of the bison.

During committee questioning, the state director of parks and recreation, Scott Simpson, assured Heinert the park had “learned our lesson” and would “provide input sessions” to hear from the public.”

Park officials plan to open the Bison Center by the spring of 2022.