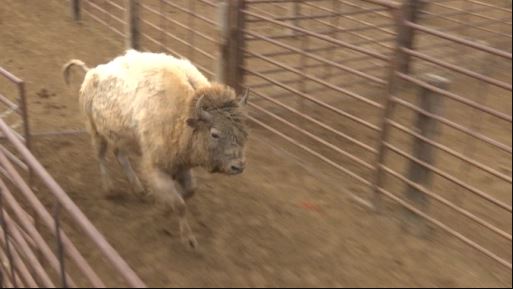 Ernie and Beverly Fischer purchased a white buffalo from the Wahpeton Zoo for their Bar 33 Bison Ranch near Selfridge, North Dakota.

Then they changed their minds. They knew the Turtle Mountain Chippewa tribe had been struggling to bring their community back together from severe effects of the COVID-19 pandemic.

The gift of a white buffalo was sure to lift their spirits. And it did!

They contacted Murton Gillis, the buffalo manager for the Turtle Mountain Tribal herd.
“I said: ‘Yes, we would want that right away,’” said Gillis.

He can still hardly believe their good fortune.

“They mean a lot for hope and integrity. With everything going on with COVID, and everybody around the world being shut down. This could bring our tribe together in a good way, through prayer. So, I hope it does have a great influence on our people,” said Gillis.

A white buffalo holds significant cultural importance to Native Americans. It is believed the animal brings hope, healing and good times ahead.

“Just the fact that we have [a white bison] we can share with other Native Americans, just very special,” said Beverly Fischer.

“My husband and I have tried to do a lot with other people. We reached out to Turtle Mountain, and they said they would take him. So, being he’s a white buffalo, and that’s got a lot of significance for the Native Americans, we gave it to Turtle Mountain.”

When the white buffalo arrived in Belcourt in mid-April, crowds gathered to get a glimpse of the rare animal.

“People that had never seen it before thought it was a myth—like a unicorn, they told us,” said Gillis, as reported by the KFYR radio/TV station.

“We actually have one now and they’re like: ‘We can’t believe that was real. We only heard about it through books.’”

The community honored the buffalo with a drum ceremony.

“That’ll be great for our community to bring it some outside visitors,” DesJarlais pointed out.

The Turtle Mountain tribe will have the white buffalo on display just outside Belcourt.

The tribe plans to breed the buffalo hoping to add another white bison to the herd. Plans are to eventually return the buffalo to the home ranch.

The Fischer Ranch in Selfridge plans to continue providing educational opportunities and plans to continue to develop and expand their ranch. They also hold an annual bison sale every winter.
Located in Belcourt ND, the Turtle Mountain Indian Reservation is a 12 x 6 mile area. (Reported April 16, 2021, by KFYR and Nexstar.)