Race with the Buffalo 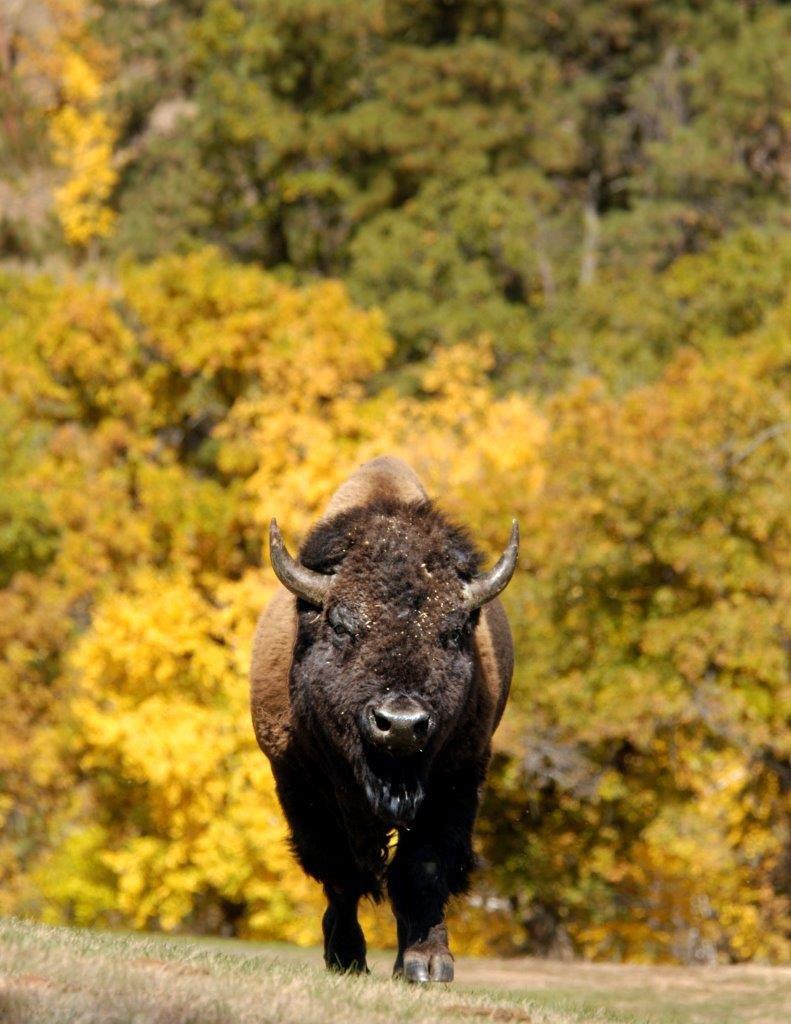 As the largest of animals, Buffalo wanted to be chief of all. But the human people disagreed and accepted his challenge in a race. SDT.

Traditional storytellers believe that old stories are best told in the native language and to listeners who understand their culture.

They say an amusing story is “not as funny” in English. Much of the spirit, humor and excitement gets lost in translation.

Often the venerable grandmother with a twinkle in her eye entertained with hilarious tales about coyote tricksters and other mischief.

The following story may have been told just for fun with its twists, turns and surprises, for a giggling circle of attentive children

Many years ago all the animals lived in peace. No one ate anyone else. All the animals were the same color, because they had not yet painted their faces.

Buffalo was the largest of the animals and he was getting hungry.

He said he deserved this as the largest and strongest of all.

But the Human People disagreed. They wanted to pull strength from the other animals and become the most important.

So buffalo challenged the Human People to a race. The winner would become chief of all the animals.

The People said they would accept this challenge, but since buffaloes have four legs and People have only two, the People claimed the right to have another animal run the race in their place.

The People chose Bird People to represent them in the race. They selected Hummingbird, Meadowlark, Hawk and Magpie.

All the other animals and birds wanted to join the race, too, each of them thinking that just maybe they too had a chance to become chief of all the animals.

All the animals took paint and painted their faces for the race, each according to his or her spiritual vision.

Skunk painted a white stripe on himself as his symbol for the race.

Antelope painted himself the color of the earth. Raccoon painted black circles around his eyes and around his tail. Robin painted herself brown with a red breastplate for the race.

The race was to be held at the edge of the Black Hills at the place known as Buffalo Gap.

All the animals, painted according to their vision, lined up between the sticks.

Among the animals were the Bird People—Hummingbird, Meadowlark, Hawk and Magpie—who would run the race with their wings for the Human People, and Runs Slender Buffalo, the fastest runner of all the buffalo.

The cry was given to begin and all the animals and birds burst from the starter stick.

Hummingbird took the lead, ahead of Runs Slender Buffalo, but his wings were so small that he soon fell behind.

The animals in the lead passed the late runners who were still headed for the stick.

Meadowlark fell behind and cheered on Hawk as he passed her.

Hawk gained on Run Slender Buffalo, and it looked like he might pass her. Her heart was pounding and her legs were tiring. But Hawk’s wings were tiring also, and he soon fell behind.

Runs Slender Buffalo was nearing the finish line as the winner.

It looked like the Buffalo would become eaters of all the animals!

Then, behind the buffalo woman, wings beating steadily, came Magpie. She was not a quick starter, but her wingbeats were hard and true. Her heart was strong. Her eyes did not wander from the finish line.

All the other animals had fallen behind. Runs Slender Buffalo looked over at the magpie, but Magpie never looked away from the starting sticks.

With each beat of her wings she moved past Runs Slender Buffalo by no more than the length of her bill.

At the starting sticks, many animals began to line up to watch the finish.

Raccoon, who had fallen out of the race early, had returned to the starting sticks.

Now he stood up between the sticks and put out his little hands for the runners to touch as they passed. He would feel the touch of whoever was in the lead, and turn toward the winner.

Closer and closer came Runs Slender Buffalo and some of the animals feared Raccoon would be trampled.

Magpie gradually flew nearer to the ground so she could brush Raccoon’s little hands as she flew past. Raccoon did not move, but stared straight at the onrushing pair.

Magpie seemed to be pulling ahead. Runs Slender Buffalo leaned forward as she ran to touch Raccoon’s hand with her great nose.

But Magpie’s wingtip touched Raccoon’s little hand and he turned toward her an instant before Runs Slender Buffalo thundered past, surrounded by a great cloud of dust. All the animals waited breathlessly for the dust to settle.

At last, there stood Raccoon with his little hand raised toward the path of Magpie.

The Human People had won the race!

Thus, they became great hunters and chief of all animals. They feasted on buffalo meat while Buffalo wandered the great plains eating grass and chewing their cud.

But the Human People never ate the Hummingbird, Meadowlark, Hawk or Magpie, who had befriended them and won the race for them.