How Humpback’s Buffalo Broke Free to Run on the Plains 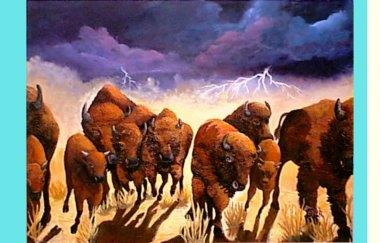 Humpback’s buffalo broke out of the corral and ran free over the earth.

In the first days a mean and powerful being named Humpback owned all the buffalo.

He kept them locked in a corral in the mountains north of San Juan, where he lived with his young son.

The buffalo were crowded into the corral, without much to eat, and most of their food was covered with dust. They longed for the green grass and sagebrush they saw on the mountainside.

Not one buffalo would Humpback release for the people on earth to eat. And he refused to share any meat with hungry people or animals who lived near him.

Coyote and his family lived in a village not far from the mountains.

One summer game was very scarce. Coyote and other hunters traveled many miles in all four directions and found nothing to eat.

Everyone in the village grew thin with hunger. Coyote’s children cried because their bellies were empty.

Coyote decided something had to be done to help the buffalo escape from Humpback’s corral. He called the people to a Council.

“Humpback will not give us any buffalo,” Coyote said. “Let us go over to his corral and make a plan to help them escape.”

They travelled to the mountains near Humpback’s place and camped. After dark they inspected his buffalo pens.

They found the stone walls had no opening. They were too high to climb, and the only entrance was through the back door of Humpback’s home.

After four days Coyote summoned the people to another Council and asked them to offer suggestions for releasing the buffalo.

“There is no way,” said one man. “To release the buffalo we must go into Humpback’s house, and he is too powerful for us to do that.”

“I have an idea,” Coyote said. “For four days we have secretly watched Humpback and his young son go about their work.

“Did you notice that the boy is lonesome? That he does not own a pet of any kind?”

The people did not understand what this had to do with freeing the buffalo, but they knew that Coyote was a great schemer so they waited for him to explain.

“I will change myself into a killdeer,” Coyote said. “In the morning when Humpback’s son goes down to the spring to get water, he’ll find a killdeer with a broken wing.

“He will want this bird for a pet and take it back into his house.

“Once I am in the house I can fly into the corral, and the cries of a killdeer will frighten the buffalo into a stampede. They will come charging out through Humpback’s house and be free to run upon the earth.”

The people thought this was a good plan, and the next morning when Humpback’s son came down the path to the spring he found the killdeer with a crippled wing.

As Coyote had planned, the boy picked up the bird and carried it into the lodge.

“It is good for nothing!” Humpback shouted at him. “All the birds and animals and people are rascals and schemers.”

“It is a very good bird,” the boy repeated.

Humpback wore a blue mask over his face and fierce nose. Through its slits his eyes glittered. Buffalo horns protruded above his ears.

His basket headdress was painted black with a zigzag streak of yellow to represent lightning.

“Take it back where you found it!” roared Humpback, and his frightened son did as he was told.

As soon as the killdeer was released it flew back to where the people were camped and changed back into Coyote.

“That plan did not work,” he said, “but I will try again in the morning. Maybe a puppy will be better than a bird.”

The next morning Humpback’s son found a small dog by the spring, lapping at the water.

The boy picked up the puppy and hurried back home.

“How foolish you are, boy!” Humpback growled. “A dog is good for nothing. I’ll kill it with my club.”

But the boy hugged the dog tightly and ran away crying.

“Oh, all right,” Humpback growled. “But first let me test that animal to make certain it is a dog. All animals in the world are schemers.”

He took a coal of fire from the hearth and brought it closer and closer to the dog’s eyes until it gave three rapid barks.

“It is a real dog,” Humpback decided. “You may keep it in the buffalo corral, but not in the house.”

This was exactly what Coyote wanted.

When darkness fell and Humpback and his son went to sleep, Coyote opened the back door of the house.

Then he ran among the buffalo in the corral, barking as loud as he could. The buffalo were badly scared because they had never before heard a dog bark.

When Coyote ran nipping at their heels, they stampeded toward Humpback’s house and smashed down the rear door.

The pounding of their hooves in his house awakened Humpback. He jumped out of bed and tried to stop them, but the buffalo crashed through his front door and escaped.

Thus it was that the buffalo escaped from Humpback’s corral at last. They scattered over all the plains and grazed on the lush green grass in the sunshine.

After the last of the big shaggy animals had galloped away, Humpback’s son could not find his small dog.

“That was no dog,” Humpback said angrily. “That was Coyote the Trickster. He has turned loose all our buffalo and we can never get them back again.”

The buffalo did not go back into the corral and were free to roam all over the earth.

There Coyote and the people could hunt them when they were hungry.