15 Facts About Our National Mammal: The American Bison

The American Bison was named the national mammal of the United States on May 9, 2016. This majestic animal joins the ranks of the Bald Eagle as the official symbol of our country—and much like the eagle, it’s one of the greatest conservation success stories of all time.

In prehistoric times, millions of bison roamed North America—from the forests of Alaska and the grasslands of Mexico to Nevada’s Great Basin and the eastern Appalachian Mountains. But by the late 1800s, there were only a few hundred bison left in the United States after European settlers pushed west, reducing the animal’s habitat and hunting the bison to near extinction. Had it not been for a few private individuals working with tribes, states and the Interior Department, the bison would be extinct today. 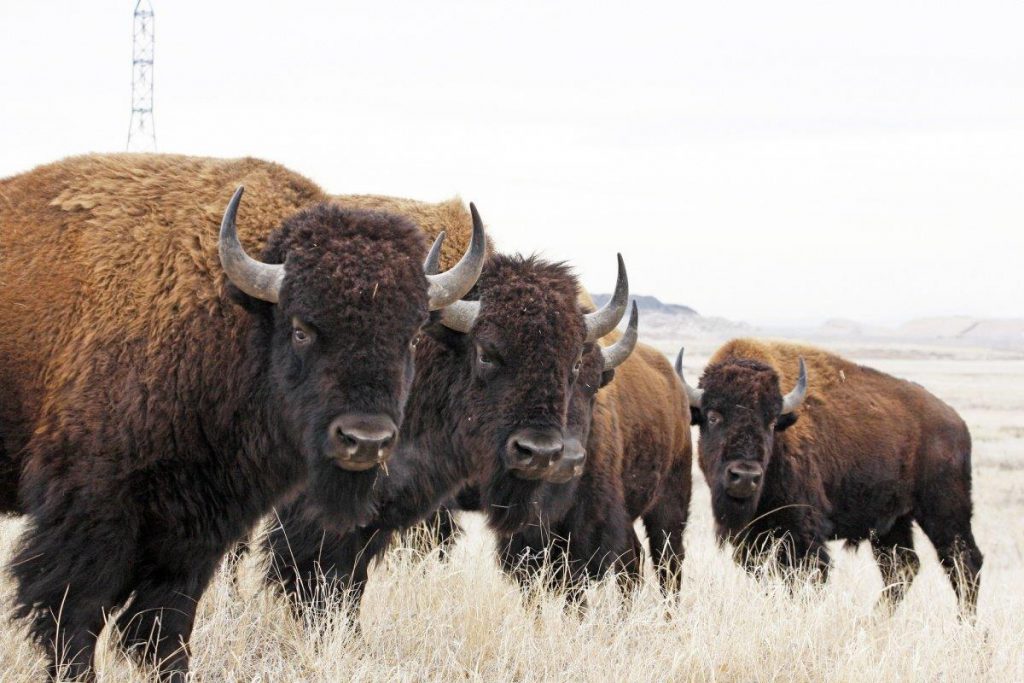 Since the late 19th century, Interior has been the primary national conservation steward of the bison. Public lands managed by Interior support 17 bison herds — or approximately 10,000 bison — in 12 states, including Alaska. 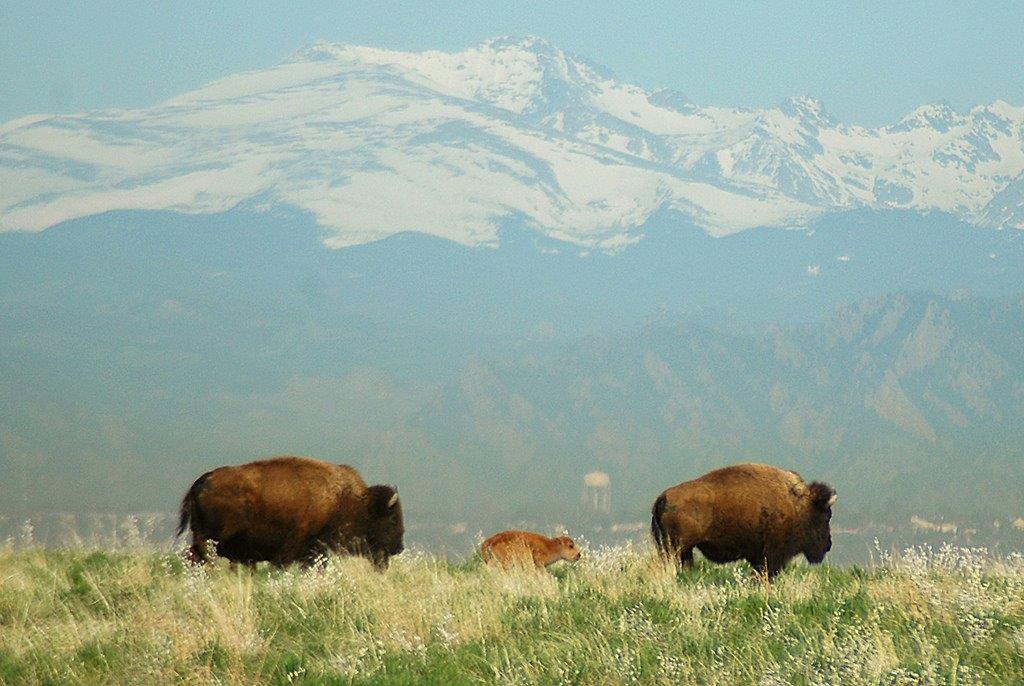 What’s the difference between bison and buffalo? While bison and buffalo are used interchangeably, in North America the scientific name is bison. Actually, it’s Bison bison bison (genus: Bison, species: bison, subspecies: bison), but only saying it once is fine. Historians believe that the term “buffalo” grew from the French word for beef, “boeuf.” 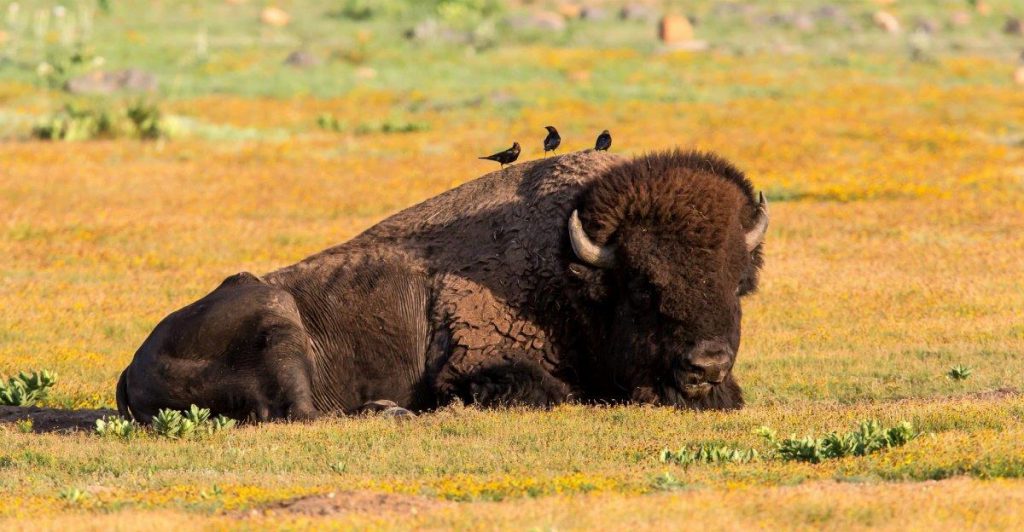 : A bison walking by the Grand Prismatic Spring at Yellowstone National Park in Wyoming. Photo by Jennifer Michaud.

What’s a “red dog”? It’s a baby bison. Bison calves tend to be born from late March through May and are orange-red in color, earning them the nickname “red dogs.” After a few months, their hair starts to change to dark brown and their characteristic shoulder hump and horns begin to grow. 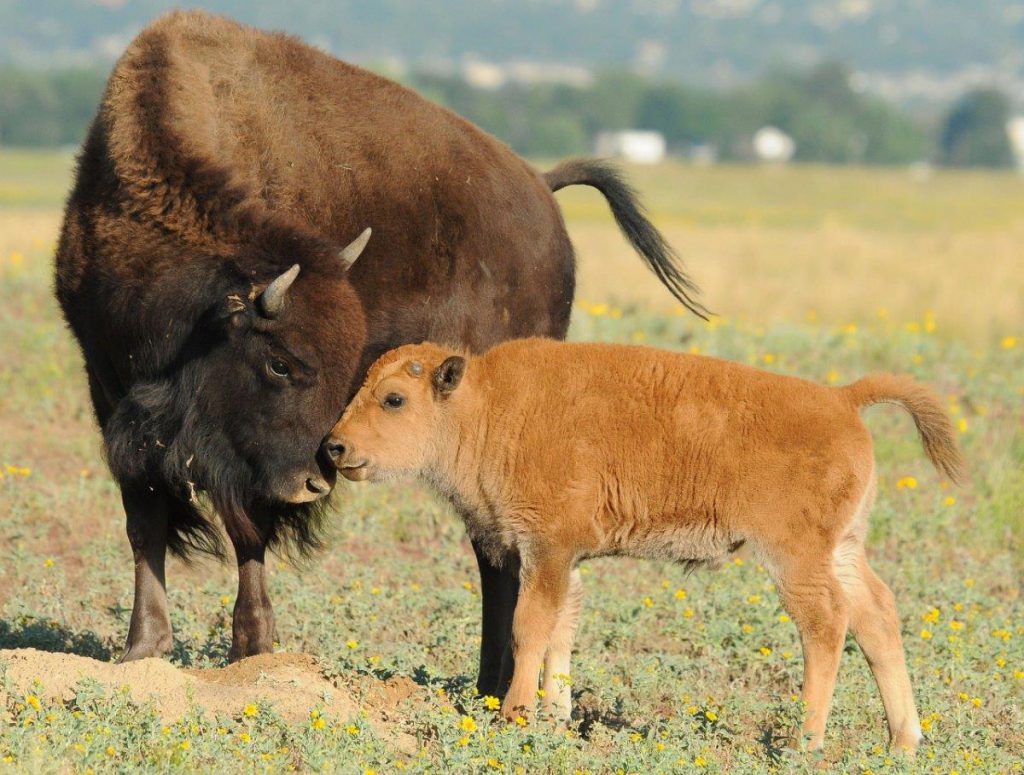 6. Bison and Native Americans are Intertwined

The history of bison and Native Americans are intertwined. Bison have been integral to tribal culture, providing them with food, clothing, fuel, tools, shelter and spiritual value. Established in 1992, the InterTribal Buffalo Council works with the National Park Service to transfer bison from national park lands to tribal lands. 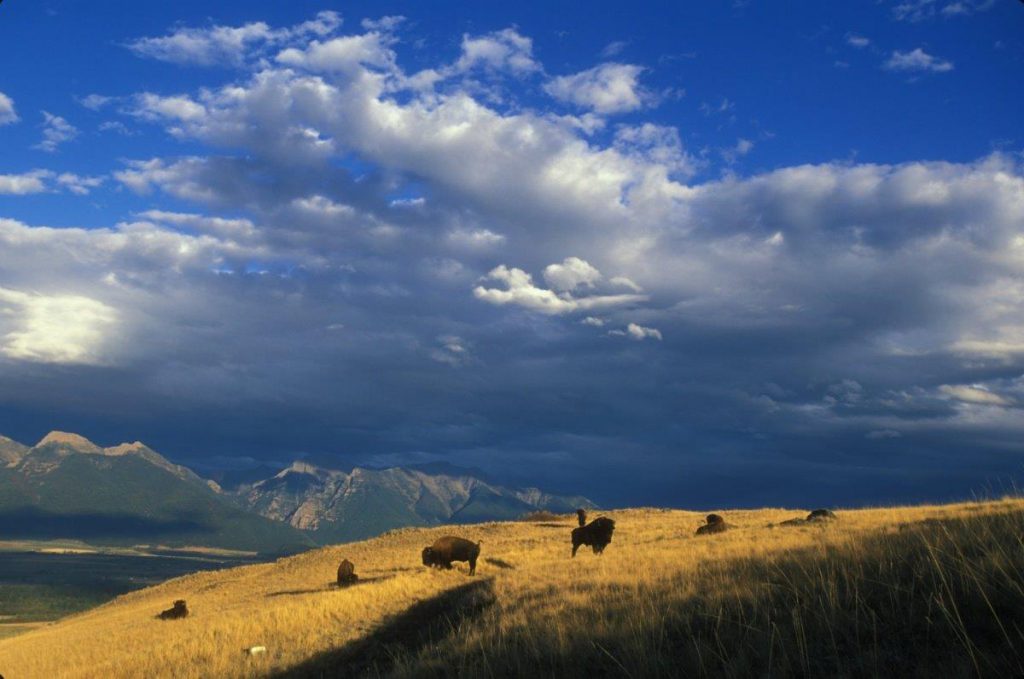 You can judge a bison’s mood by its tail. When it hangs down and switches naturally, the bison is usually calm. If the tail is standing straight up, watch out! It may be ready to charge. No matter what a bison’s tail is doing, remember that they are unpredictable and can charge at any moment. Every year, there are regrettable accidents caused by people getting too close to these massive animals. It’s great to love the bison, but love them from a distance. 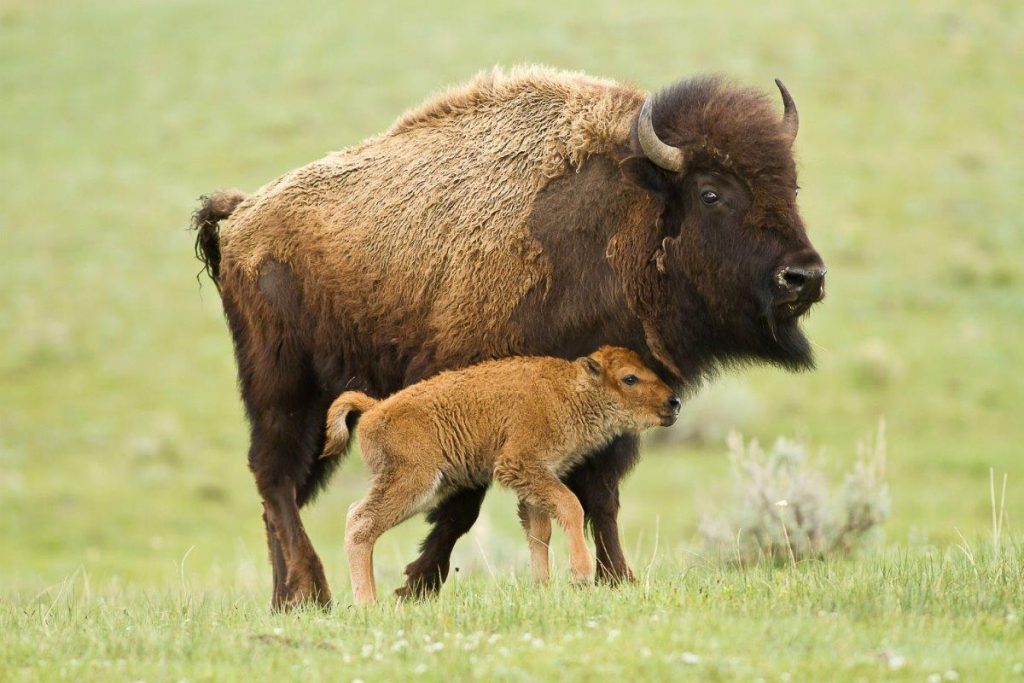 A bison watching over a calf at Yellowstone National Park. Photo by Diana LeVasseur

Wind Cave National Park’s herd helped revive bison populations around the country. The story starts in 1905 with the formation of the American Bison Society and a breeding program at the New York City Zoo (today, the Bronx Zoo). By 1913, the American Bison Society had enough bison to restore a free-ranging bison herd. Working with Interior, they donated 14 bison to Wind Cave National Park in South Dakota. More than 100 years later, the bison from Wind Cave have helped reestablishing other herds across the United States and most recently in Mexico. 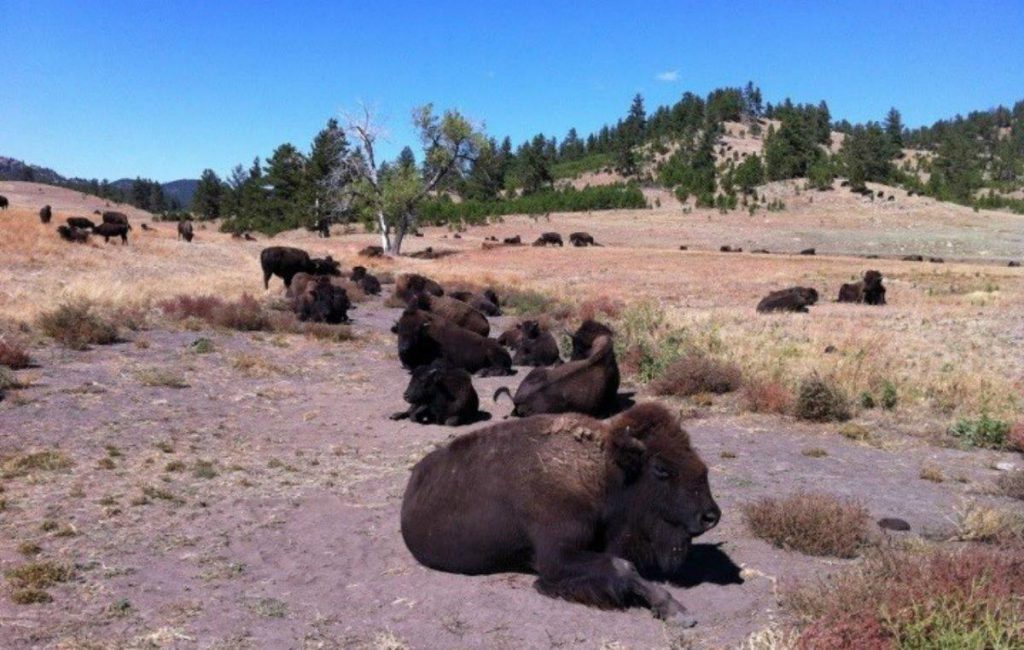 Bison may be big, but they’re also fast. They can run up to 35 miles per hour. Plus, they’re extremely agile. Bison can spin around quickly, jump high fences and are strong swimmers. 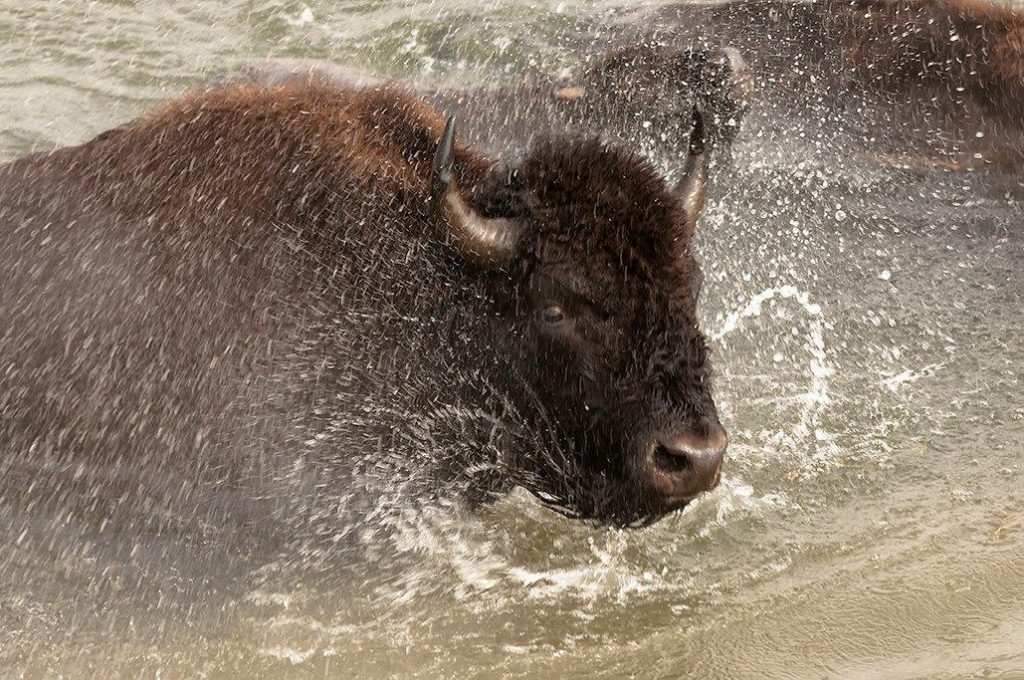 A bison charging through a river at Yellowstone National Park. Photo by Donald Higgs.

Pass the salad, please. Bison primarily eat grasses, weeds and leafy plants—typically foraging for 9-11 hours a day. That’s where the bison’s large protruding shoulder hump comes in handy during the winter. It allows them to swing their heads from side-to-side to clear snow — especially for creating foraging patches. Learn how bison’s feeding habits can help ensure diversity of prairie plant species especially after a fire. 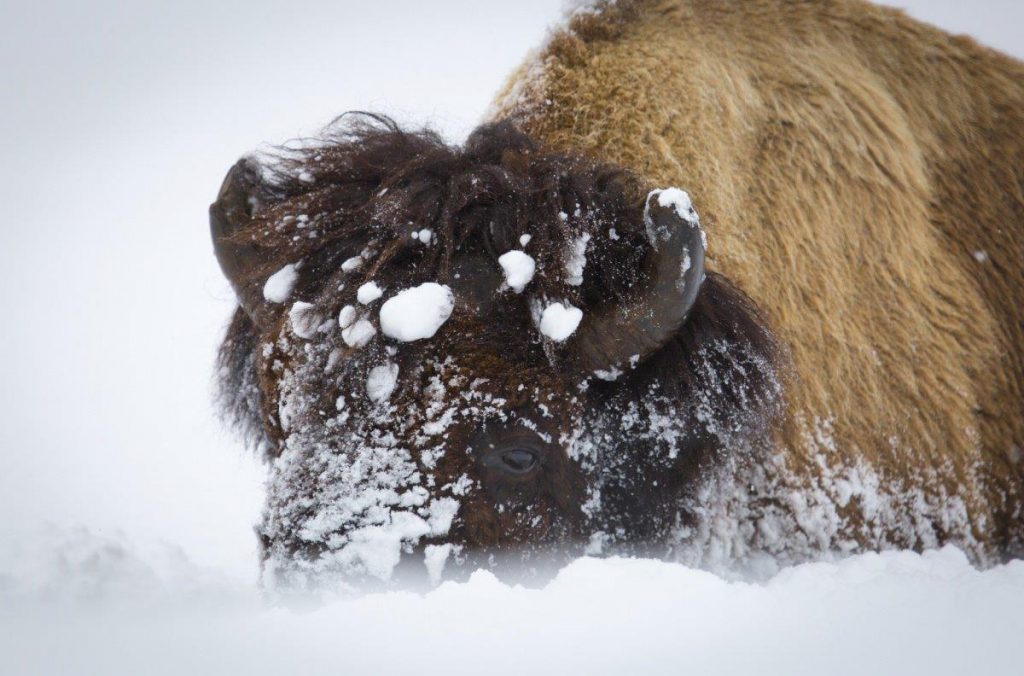 From hunter to conservationist, Teddy Roosevelt helped save bison from extinction. In 1883, Teddy Roosevelt traveled to Dakota Territory to hunt bison. After spending a few years in the west, Roosevelt returned to New York with a new outlook on life. He paved the way for the conservation movement, and in 1905, formed the American Bison Society with William Hornaday to save the disappearing bison. Today bison live in all 50 states, including Native American lands, wildlife refuges, national parks and private lands. 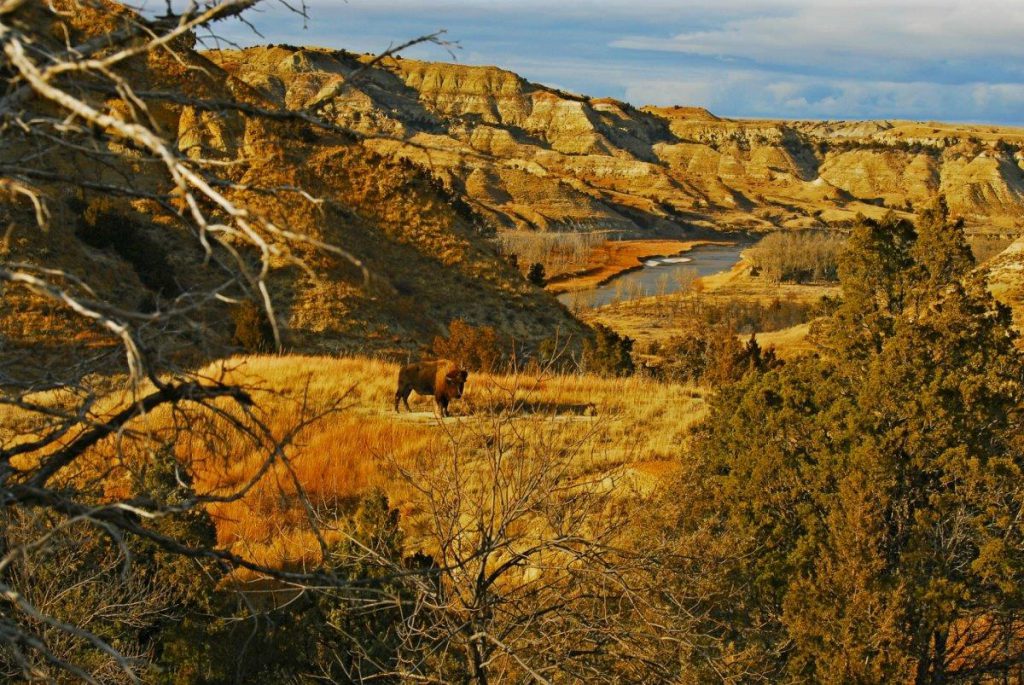 Bison can live up to 20 years old. The average lifespan for a bison is 10-20 years, but some live to be older. Cows begin breeding at the age of 2 and only have one baby at a time. For males, the prime breeding age is 6-10 years. Learn how Interior works to ensure genetic diversity and long-term viability of bison.

A little dirt won’t hurt. Called wallowing, bison roll in the dirt to deter biting flies and help shed fur. Male bison also wallow during mating season to leave behind their scent and display their strength. 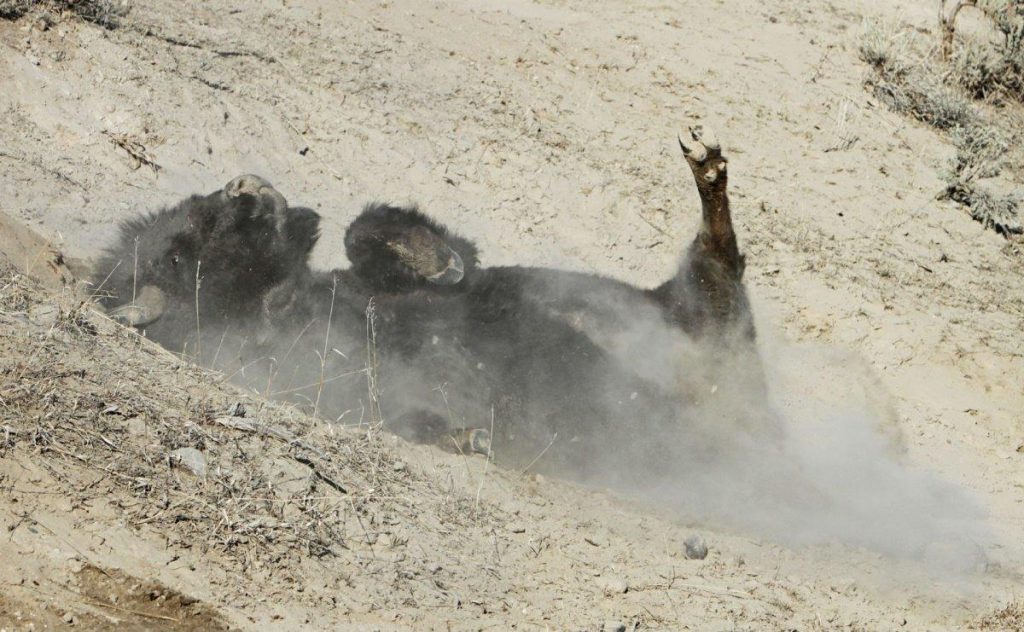 A bison rolling around in the dirt of a wallow. Photo by Jim Peaco, National Park Service.

The American bison’s ancestors can be traced to southern Asia thousands of years ago. Bison made their way to America by crossing the ancient land bridge that once connected Asia with North America during the Pliocene Epoch, some 400,000 years ago. These ancient animals were much larger than the iconic bison we love today. Fossil records show that one prehistoric bison, Bison latiforns, had horns measuring 9 feet from tip to tip. 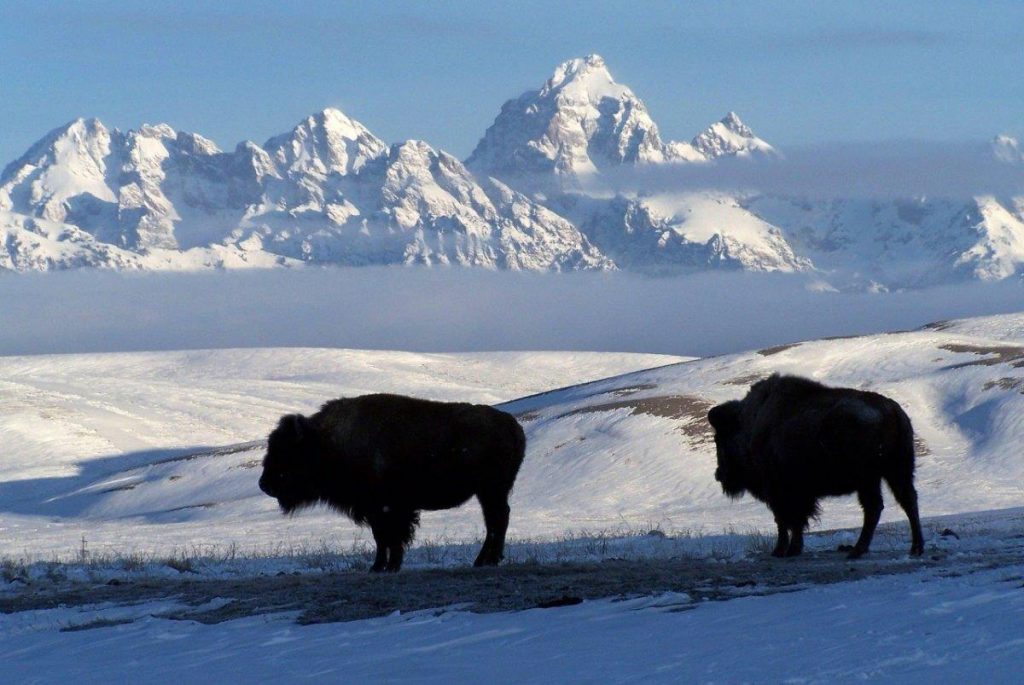 Bison standing in the snow at the National Elk Refuge in Wyoming. Photo by U.S. Fish and Wildlife Service.

Bison are nearsighted—who knew? While bison have poor eyesight, they have excellent senses of smell and hearing. Cows and calves communicate using pig-like grunts, and during mating season, bulls can be heard bellowing across long distances. 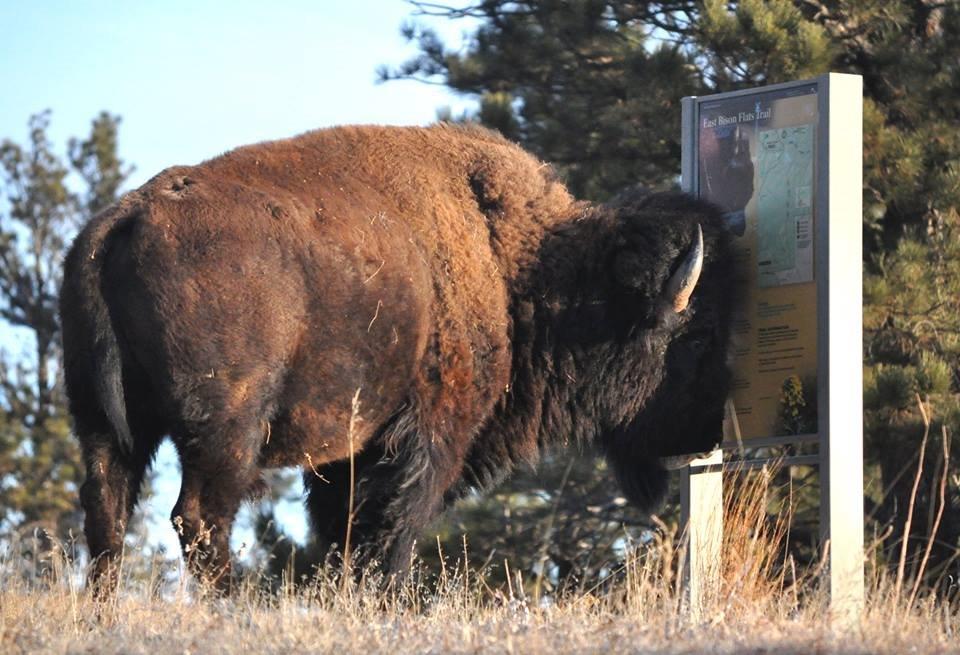 *Although DOI recognizes Yellowstone Park as being “the only place” in the US where bison have continuously lived since prehistoric times, they are overlooking the herd started by the Fred Duprees on the Standing Rock Sioux Reservation in South Dakota.

The facts are that just before the last wild buffalo herd was finished off on Standing Rock in October 1883, Pete Dupree and his brothers and sisters brought a buckboard wagon, along with extra horses, to the rich buffalo ranges about 60 miles from their home on the Cheyenne River at the mouth of Cherry Creek.

This was in the spring of 1881 or 1882 when calves were newborn. There the Native American Duprees captured 5 buffalo calves and tied them in the wagon. They took them home and nourished them for years until the herd grew to 83 head of full-blood buffalo, running on the reservation.

Meanwhile the Yellowstone Park herd had dwindled to a low of about 25 head. It was replenished with buffalo from a number of sources across the United States and Canada.
Francie M. Berg