Kiowa Farewell to the Buffalo 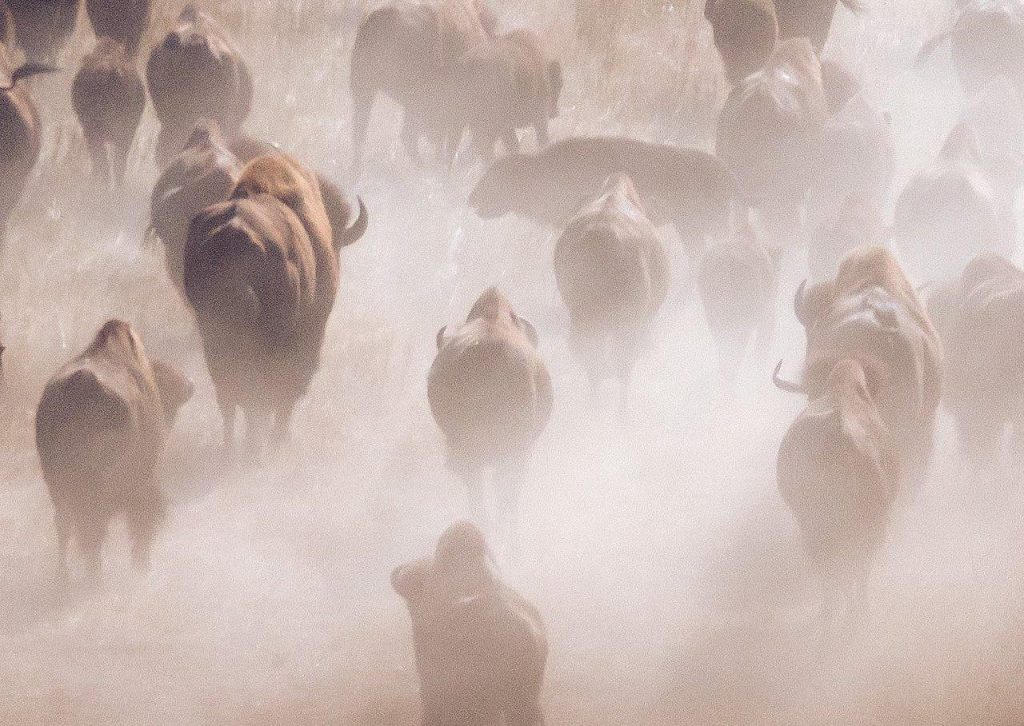 The buffalo came in the mists and disappeared into the mountain. The face of Mount Scott swung shut and closed on them forever.

The buffalo provided everything the Kiowas ever needed.

Their tipis were made of buffalo hides, stitched together with sinew. So were their clothes and tough moccasins.

They ate dried buffalo meat and pemmican all through the year. Containers in which they kept food and provisions were made of hide, bladders and stomachs.

Even more important, the buffalo sustained the Kiowa culture, their spirituality and religion.

When possible, a white buffalo calf must be sacrificed in the sun dance.

The priests and medicine men used parts of the buffalo to make their prayers when they healed people or when they sang to the powers above.

Buffalo were the lifeblood of the Kiowas.

When white men built railroads, or when they wanted to farm and raise cattle, the buffalo still protected the Kiowas.

They tore up the railroad tracks and gardens. They chased cattle off their ranges.

The buffalo loved their people as much as the Kiowas loved them.

But the buffalo still kept coming on, coming on, even into the post cemetery at Fort Sill. Soldiers were not enough to hold them back.

Then the white men hired hunters to do nothing but kill buffalo. Up and down the plains those men ranged, shooting sometimes as many as a hundred buffalo a day.

Behind them came the skinners with their wagons. They piled the hides and bones into the wagons until they were full, and then took their loads to the new railroad stations that were being built, to be shipped east to the market.

Sometimes a pile of bones rose as high as a man, stretching a mile along the railroad track.

The buffalo saw that their day was over. No longer could they protect the Kiowa, their people.

Sadly, the last remnant of the great herd gathered in council, and decided what they would do.

The Kiowas camped one night on the north side of Mount Scott, those of them who were still free to camp.

The dawn mist was still rising from Medicine Creek. As she looked across the water, peering through the haze, she saw the last buffalo herd appear like a spirit dream.

Straight toward Mount Scott came the leader of the herd, walking with determination. Behind him came the cows and their calves, and the few young males who had survived the last hunting raid.

As the Kiowa woman watched, the face of the mountain swung open.

Inside Mount Scott she saw that the world was green and fresh, as it had been when she was a small girl.

The rivers ran clear, not red. The wild plains were in blossom, chasing the red buds up the inside slopes.

Into this world of beauty the buffalo walked and began grazing, never to be seen again. The face of Mount Scott swung back and closed on them forever.