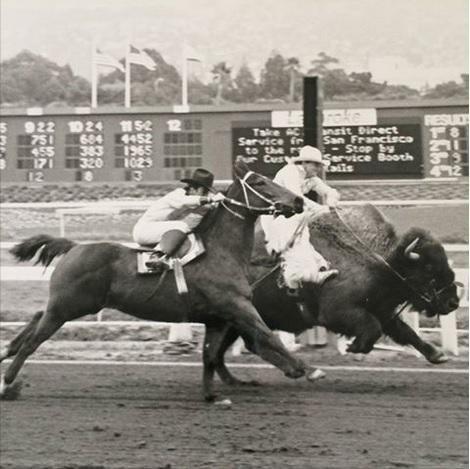 Meet Harvey Wallbanger, a formidable sprinting buffalo seen on racetracks of the 1980’s and ‘90s across America, Canada and Mexico, here ridden to a win by his owner and trainer Collin ‘TC’ Thorstenson.

Harvey was an orphan buffalo who thought he was a horse, according to his owner, trainer and jockey Collin ‘TC’ Thorstenson and many fascinated spectators who watched him race.

Thorstenson said he was raised on a Sioux Indian reservation in the hills of North Dakota, was always fond of animals and trained small pets as a youngster.

He drove coal trucks in Wyoming and became a jockey and trainer.

Harvey’s story began in 1980 when his mother was shot by a poacher.

TC, who at that time worked on the Milwaukee Railroad, rescued the orphaned buffalo

Thorstenson kept the little guy in his car and bottle-fed him several times a day—whenever he took a break.

“He was just 35 pounds back then, and I fed him by a bottle until he was a year and a half,” he said.

“I carried him in the back of my car until he got to be about 250 pounds.”

As Harvey graduated to living in a barn, he followed Thorstenson around like a dog.

But when TC left the young buffalo alone in the barn, he was not happy. When he grew restless he kicked and slammed his body at the divider wall of his stall.

“I named him Harvey Wallbanger because he was always banging his body against the wall of the pen,” said Thorstenson.

As he grew to full size, his owner rigged a kind of saddle to fit and climbed on.

Harvey took well to being ridden and the two began performing at rodeos. 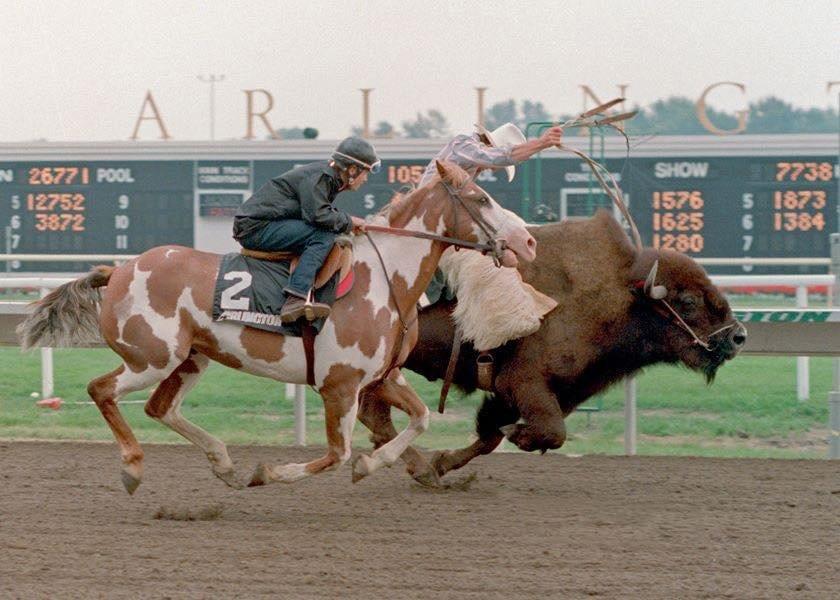 “I named him Harvey Wallbanger because he was always banging his body against the wall of his pen,” said Thorstenson, who rescued the orphan when he was just 35 pounds and fed him from a bottle until he was a year and a half.

Audiences loved him and by 1985 their interest was enough to get Harvey invited to race at Energy Downs in Gillette, Wyoming.

Harvey Wallbanger made his 6-year-old racing debut under the name “TC and Harvey” in a 110-yard exhibition race against a quarter horse on a real racetrack.

He competed against a horse that was bred for speed and less than half his weight.

Harvey won the race by 2½ lengths and that’s where the legend began.
“It was a great attraction for race tracks because it got young, more enthusiastic, kids out there to watch him do his thing,” Thorstenson said.

Next they travelled to Miles City, Montana, and raced for the second time.

Harvey’s Natural Desire was to Win

Harvey would burst through the starting gate, lean toward the rail and run along it as hard as he could to the finish line.

Thorstenson’s buffalo had a natural desire to win. 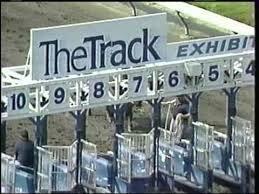 Harvey was a tight fit in the starting gate. But he became well-known for his knack of charging out of the gate fast, as well as his tenacity at the finish. As TC told the crowds, “He’s a ton of fun and he thinks he’s a horse.”

TC told the Farm Show in 1989 that about half his audience came to see a buffalo. “The other half came to see Harvey win.”

Most people had never seen a buffalo, and Harvey was one of the only racing buffalos of his time.

“There are two or three other trained buffalo in North America, but Harvey is the only one that races competitively,” TC explained.

“A buffalo’s wild instincts make it difficult to break, and not all of them are trainable.

“Even Harvey may never be completely trustworthy. Buffalo are strong enough to flip a horse off the ground and kill it with their sharp horns. I could have trained 40 good horses during the time I spent training Harvey.” 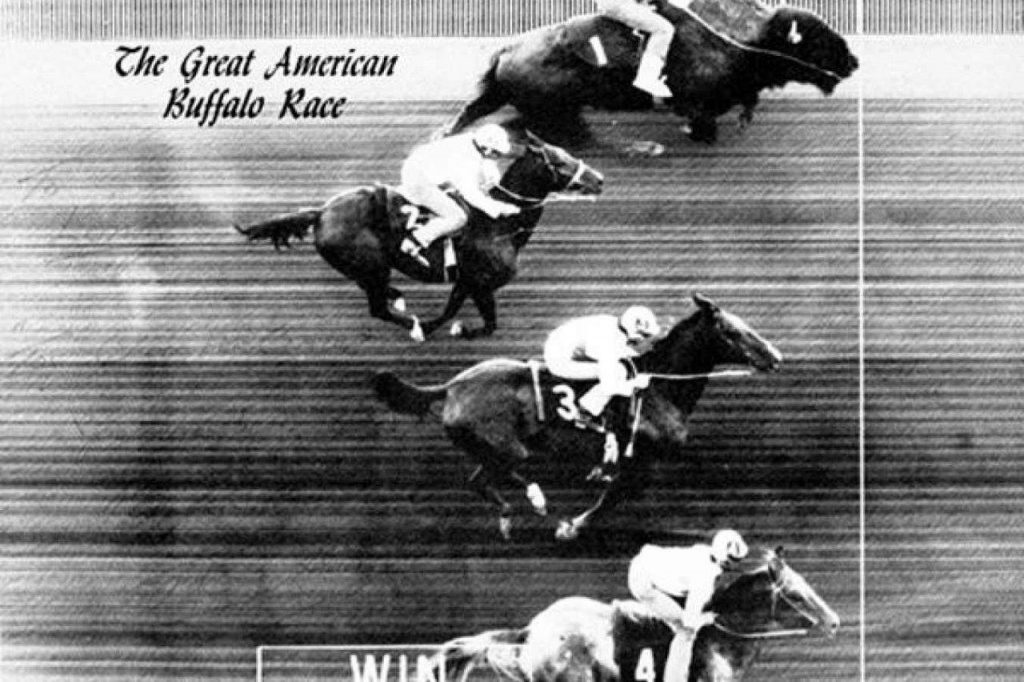 Harvey enjoyed great racing success in America, Canada and Mexico. His best year was in 1990, when he ran in 20 races and earned $108,000. He won 79 races in 93 starts running against quarter horses, thoroughbreds and harness racers.

His best race was the 110-yard race. He covered the distance in 10.14 seconds. Usually it was an exhibition race with no betting allowed.

Because of his size, snorting and unique smell, most competing horses were afraid to get near him, so he had an advantage running alone there on the rail.

Harvey Wallbanger was led into the starting gate on a 40-foot rope.

As the flashy showman, Thorstenson waved his cowboy hat as he rode into the chute.

“Most horses get nervous when they see the buffalo because of his quick movements and unusual sounds, so Harvey usually runs on the rail.”

Electrifying speed out of the gate was his secret weapon

Weighing in at over a ton, he was a pleasure to watch.

As TC told the audience, “He’s a ton of fun and he thinks he’s a horse.”

Some in the stands questioned the quality of Harvey’s competition and the actual integrity of his races. They suggested that the horses let Harvey win on purpose.

One writer charged that “Harvey travelled with horses he could outrun. I think the wrangler brought 3 with him to Portland.”

Another wrote, “The Jockey is holding that horse back! Cool story—but I very much doubt that bison ever beat a good healthy horse.”

On another day a journalist sympathized with Harvey’s loss.

“I watched one of Harvey’s races from 1988, where he was racing two quarter horses. Although he tried, he just never got that load moving and he lost,” he wrote.

“It was bizarre to see a 1-ton monster chugging down the lane, and it just wasn’t a very pretty race, no matter how you looked at it.”

“Watched this race at Thistledown in North Randall. GREAT MEMORY!” One reported.

“I saw this race, it was at Golden Gate Fields, late 70s early 80s or so. Buffalos are FAST,” wrote another. 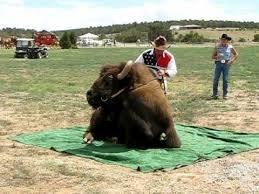 “I could have trained 40 good horses during the time I spent training Harvey,” said trainer TC Thorstenson. “Even Harvey may never be completely trustworthy. Buffalo are strong enough to flip a horse off the ground and kill it with their sharp horns.”

Pete Monaco, writing sports for The Spectrum, wrote this about Harvey Wallbanger in a story written after his death, titled The Eighth Pole on Aug 18, 2018.

“Being a racing buffalo, Harvey automatically captured the attention of most people—but he also captured their hearts.

“TC seemed to have his hands full before, during and even after the race. To claim the fix was in, concerning a non-wagering event that involved a buffalo seems a bit ridiculous.”

Added Monaco, “I did watch another race

where I swear he stretched his neck out at the wire to win by a long buffalo nose over three horses in a photo finish!

“All contestants were within a half-length of each other at the finish, and Harvey dug in gamely on the rail to get the victory.

“This race was actually a beautiful thing. And I might’ve watered up a bit from the effort of this animal on that day,” he confessed.

End of a Promising Career 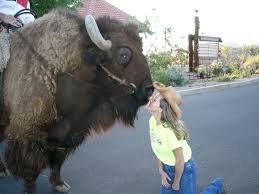 Small cowgirl offers up a kiss for Harvey, the racing buffalo, at a wild west event put on by Thorstenson

TC moved to Arizona and became a regular with his buffalo showing up at Arizona Rattlers Arena Football League games.

Unfortunately, Harvey’s career ended abruptly at the age of 13.

In 1991 he died after eating contaminated hay in Tuscon, Arizona.

TC was devastated and sued Kenny and Jimmy Murdock, who furnished feed for the rodeo.

In court the Murdocks conceded that oleander, a decorative and poisonous bush, probably got mixed in with the hay.

He started over by training a young buffalo he called Harvey Wallbanger Junior.

“My buffalo aren’t just buffalo,” he said. “They are family members.”

But Junior wasn’t interested in winning. He refused to grab the rail or run hard to stay ahead of the race horses.

However, he found his niche acting in movies and commercials and promoting rodeos and sporting events around the nation for a time.

But Junior also died too soon—of a virus that is unique in affecting American bison from infected sheep.

Together they purchased a Scottsdale ranch, where he kept a small herd of buffalo, and dealt in real estate in Arizona. 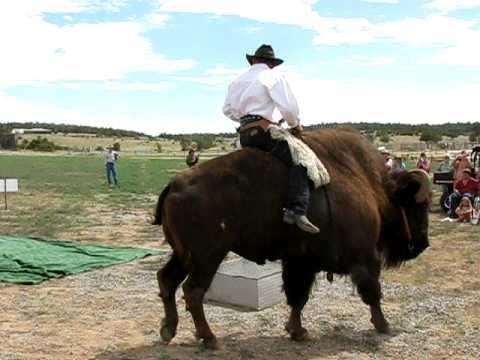 “He is the buffalo stuntman who rides a 2,800-pound beast through rings of fire. He’s the mounted shooter with the arena behind the Roadhouse saloon,” according to one sports report.

Unfortunately, Lesher drowned during a camping trip, which cast some suspicion for a time on her new husband, who was much younger.

TC moved to the upscale town of Cave Creek, where he attempted to bring a Western venue that would feature events such as mounted shooting, barrel racing and other western events.

His efforts finally came to fruition with the opening of a Western restaurant, bar and venue he called Hogs and Horses.

In his new digs, TC Thorstenson was described thus:

“He is the buffalo stuntman who rides a 2,800-pound beast through rings of fire. He’s the mounted shooter with the arena behind the Roadhouse saloon.

“He’s a horse whisperer to some, a drinking buddy to others and, as the local newspaper tells it, he is ‘rapidly becoming a Cave Creek land baron.’

“On a warm Tuesday night in April, he works the crowd in woolly chaps and a stars-and-stripes western shirt.

“He holds a revolver on his belt, a buffalo on a rein and a wide grin across his face as he poses at a living history attraction west of town.

“’Check it out, folks! There’s a shooting match after the parade, behind the Roadhouse,’ he announces. ‘Come and watch it!’ ” 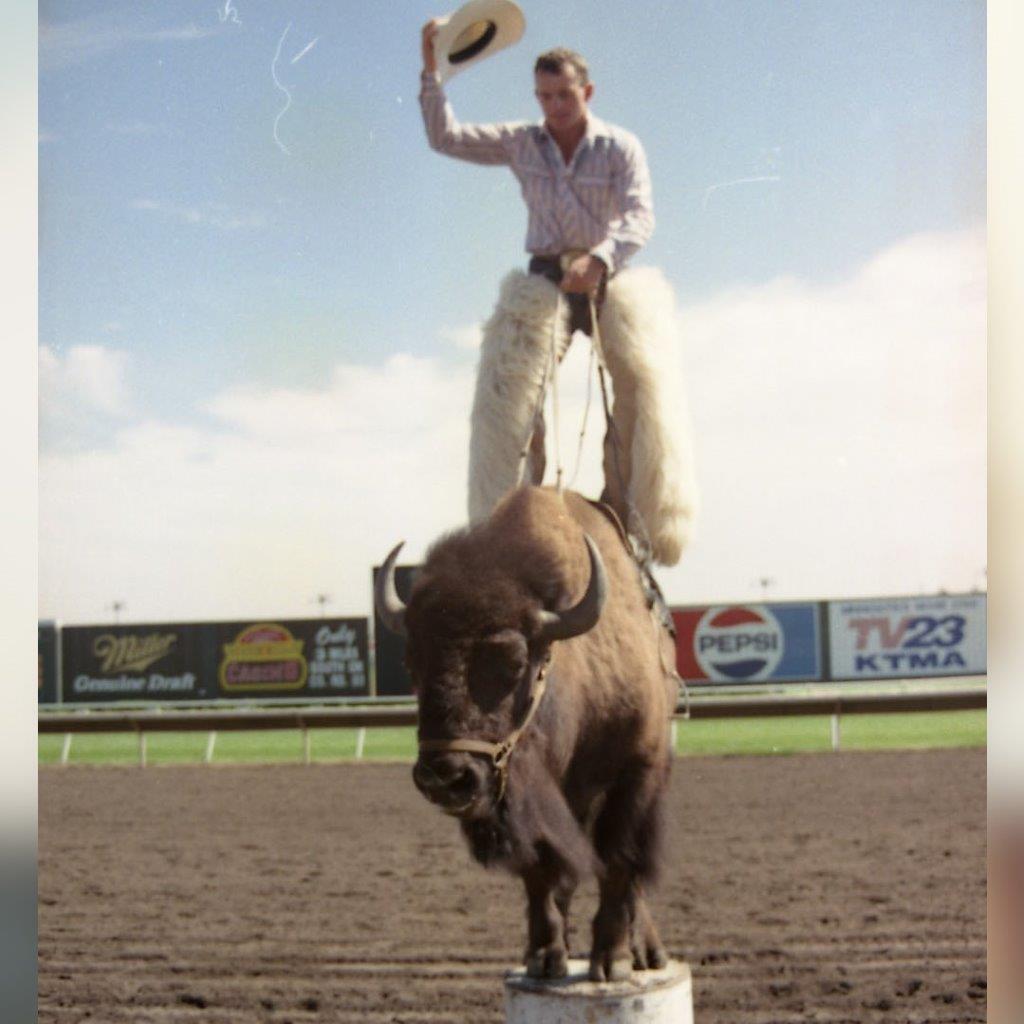 On a warm night in April, Thorstenson worked the crowd in woolly chaps and a spangled western shirt. “He holds a revolver on his belt, a buffalo on a rein and a wide grin across his face as he poses at a living history attraction west of town,” according to one reporter.

He once sponsored a ‘Running with the Bulls-U.S.A.,’ a tamer version of Pamplona, Spain’s annual nine-day festival of San Fermin.

Ever the showman, TC continued to train and show buffalo.

His favorite, Harvey had enjoyed great success in America, Canada and Mexico.

He won 79 races in 93 starts running against all comers—quarter horses, thoroughbreds and harness racers.

Unfortunately, TC never again found a buffalo with a genuine desire to win his race—who could take the place of his beloved Harvey Wallbanger. 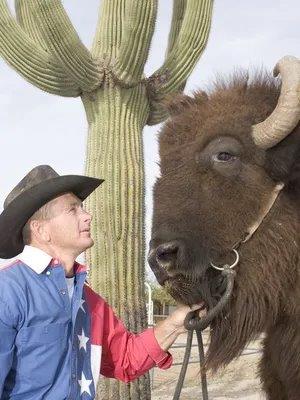 “I could have trained 40 good horses during the time I spent training Harvey,” said trainer TC Thorstenson. “Even Harvey may never be completely trustworthy. Buffalo are strong enough to flip a horse off the ground and kill it with their sharp horns.”