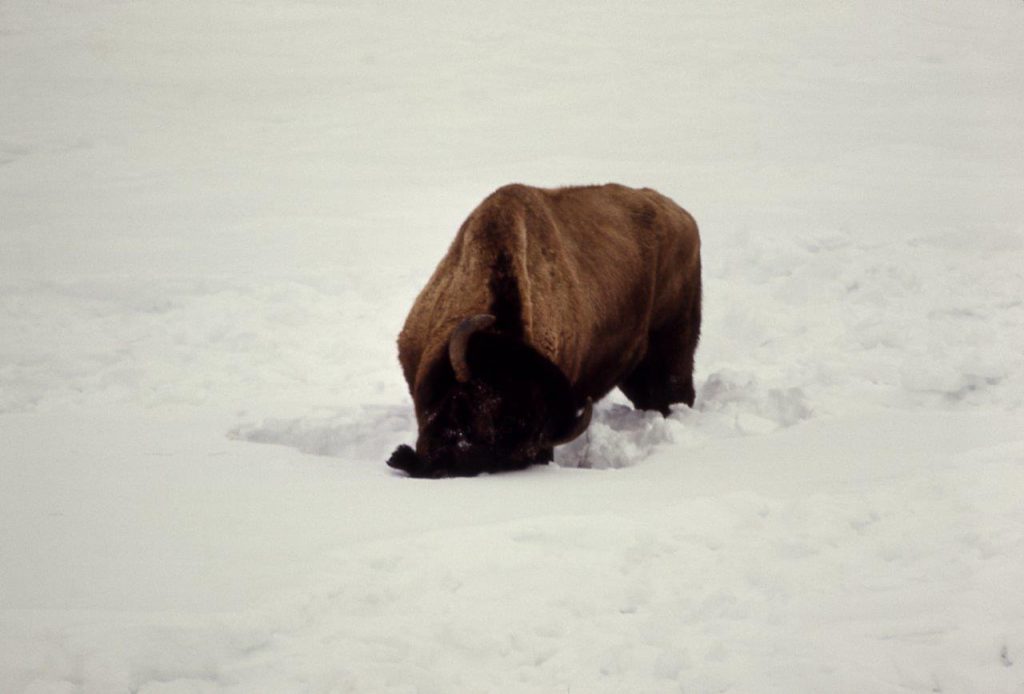 When snow lies deep on the prairie, buffalo swing their heads to sweep it away and find nourishment in the grass below. National Park Service.

Buffalo are known for their great natural vigor, surviving the worst blizzards of the north.

A freak blizzard in October 2013 killed tens of thousands of cattle in western South Dakota, as well as sheep and horses, when four feet of heavy wet snow with powerful winds drove them over banks, into creeks and waterholes and piled up against fences in deep snowdrifts.

Some ranchers lost fifty to seventy-five percent of their livestock and faced financial ruin.

In another deadly storm the winter of 1997-1998, with heavy financial losses to livestock, the toll was apparently only one buffalo death. He was run off an icy bridge by an eighteen-wheeler.

Those who raise buffalo testify to their hardy endurance in cold weather.

The animals have dense hair growth, so dense—coarse guard hairs with soft wool underneath—that every square inch has ten times as many hairs growing as does an inch of cow hide, reports Dale F. Lott, University of California Wildlife, Fish and Conservation biologist.

In extreme cold when fat stores are low, this means “the difference between life and death,” says Lott.

Buffalo face into the harsh blizzards that sometimes hit the northern plains, protected by their massive heads and shoulders. With forequarters well insulated by their heaviest hair growth, they stand or move slowly into the wind until the storm blows over.

Unfortunately, cattle and sheep do just the opposite—a sometimes deadly choice—turning their backs to a fierce blizzard. They drift with the wind into water holes and rivers or over high banks, where they may drown or die in pileups.

When snow lies deep on the prairie, buffalo plow down to find grass. Their humps contain muscles supported by vertebrae that allow them to swing their massive, low-hanging heads side to side, sweeping away snow to reach plants and grass.

When water is frozen, they eat snow.

Ernest Thompson Seton declared their hardiness during the hard winter of 1885-86.

Reporting on a Manitoba herd in Canada, he wrote, “These buffalo receive no care beyond what is necessary to prevent their wandering away. . . They live on the open prairie summer and winter, subsisting on the wild grass, even when they have to dig for it through one or more feet of snow.

“Nor is it a bare existence that they so maintain. For when I saw them late in January, they were finding grass enough not merely to feed, but to fatten them.

“When a blizzard comes on, they lie down close together with their backs to the wind and allow the snow to drift over them, so that under the combined protection of the snow and their own woolly coats they are perfectly comfortable.

“In January 1884 one of the cows calved on the open prairie and though at the time the thermometer registered 38 degrees below zero, neither cow nor calf appeared to suffer the slightest inconvenience.”

“Buffalo face the storm and lower their heart rates and metabolism so their strength is maintained,” notes Mike Faith.

He says Native people see this hardiness as an affirmation of their own ability to survive adversity.

“You couldn’t do anything, you couldn’t see nothing.” When finally able to get to his Herefords, they were in tough shape. “All the cattle had ice and snow on their eyes and they couldn’t see,” he reported.

That blizzard prompted a South Dakota rancher who raised both cattle and buffalo to totally convert his herd to the species that survived the blizzard unscathed, according to author Douglas Ramsey in “One to Remember: The Relentless Blizzard of March 1966.”

A record 15.5 inches of snow fell in Bismarck on the second day, and 35 inches piled up during the epic event, with relentless winds of 70 to 80 mph.

Snow drifts measured at least six feet deep in downtown Dickinson, and in some areas topped thirty feet, choking roads all across the state. A Northern Pacific passenger train carrying 500 people was stopped and buried by the storm near New Salem.

But buffalo survived, wrote Ramsey: “The buffalo, being native to the plains, form a ‘V’ shape with the bulls facing into the wind and the cows and calves inside.

“During the blizzard they moved three times. They move till the snow gets too deep, then they move again.”