The 2018 Farm Bill authorizes the USDA’s National Institute for Food and Agriculture to recognize centers of excellence in research, extension and education in the food and agricultural sciences. The Center of Excellence for Bison Studies will be coordinated through SDSU, but will include active participation by researchers and extension officials from other land grant universities, including 1994 tribal land grant colleges and universities.

The Center will focus on research activities to improve bison herd health and production and the economic viability of both private and tribal bison producers.

Plans for the Center of Excellence began in May 2017 when leaders of the National Buffalo Foundation, the National Bison Association’s Science and Research Committee and Sinte Gleska University convened with SDSU researchers at the main campus in Brookings, South Dakota. Participants at the session agreed on a number of research priorities, but recognized that a coordinated effort was needed to generate the resources to underwrite those initiatives.

“We will be pulling together the leading experts in their fields to help us gain a better understanding of this animal and the ecosystems it lives in, and to develop new resources for the people who raise bison,” said Dr. Kristi Cammack, the newly installed Director for the Center of Excellence.

Dr. Bill Gibbons, director of the South Dakota Agricultural Experiment Station at SDSU and Associate Dean for Research, added, “We realized in that 2017 meeting that there were many unanswered questions regarding all aspects of bison, ranging from their role in the landscapes they occupy to their importance in Native American culture to their significance in agriculture. And, we recognized that there are many qualified researchers interested in taking on those projects. What was missing was a unified commitment to bring together the resources to support that research.”

Phil Baird, Provost of Sinte Gleska University in South Dakota, noted, “Bison are once again coming back to Tribal lands across the country. Being a part of the Center will help Tribal managers as they restore both cultural herds and grow Tribal nation-building herds.”

The Center of Excellence represents a significant milestone in the restoration of bison herds to North America, according to Dave Carter, Executive Director of the National Bison Association. “Our knowledge on how best to manage our herds has evolved through a lot of trial and error, supplemented by scattered studies at universities across North America. The Center of Excellence will bring together academicians, ranchers, and Tribal bison managers in a collaborative commitment to help us be better stewards of our herds.”

The National Bison Association’s Science and Research Committee will work closely with the Center’s leadership to identify key research and outreach priorities.

The National Buffalo Foundation, a 501©(3) charitable foundation dedicated to being the major trusted funding source for bison research and education, will embark upon a major fundraising campaign in the coming months to provide the resources to underwrite the Center’s initial research projects. “Having the Center of Excellence in place and with SDSU’s direct involvement, we all see a much broader view of the future of bison, while at the same time opening many fresh opportunities to expand our fundraising initiatives,” said Cecil Miskin, chair of the Foundation. 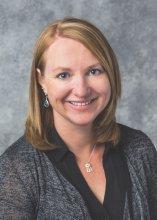 Kristi Cammackis the new Director for the Center of Excellence, Rapid City. She expects to see a much broader view of the future of bison. Photo SDSU.

Congratulations to all who worked so hard to bring about the Center of Excellence for Bison Studies. Especially the National Bison Association and the National Buffalo Foundation for helping steer this idea to fruition.

South Dakota State University stepped up to the plate to fill this dire need and has announced the formal launching of the Center of Excellence for Bison Studies—to be headquartered at SDSU’s West River Research and Extension facility in Rapid City, SD.

It has been all too obvious for too long that bison research was missing. It should have been easy, practically a no-brainer. Yet it took three years to launch this improvement on what Dave Carter of the National Bison Association has generously called “trial and error and scattered studies.”

I feel sure that researchers will look back in amazement in coming years. Surely, no other livestock business has been so sadly neglected by the extension service and land grant colleges. Perhaps there’ll even be a 4-H project someday—as are goats and even ducks and geese.

As a former county extension agent, I can only say I was simply shocked . . . shocked upon discovering the lack of bison research—almost alone among livestock species. Nearly every state has multiple cattle and sheep specialists, and practically does cattle research on top of other cattle research. Even beginning 4-Hers know where to ask if they have a tough question.

But not bison ranchers. Bison ranchers are literally on their own to experiment with “trial and error,” as Carter put it, to find out what might work. They visit successful buffalo ranchers and help each other.

Their several organizations put on valuable grassroot workshops taught by their peers. Can you believe that bison associations request research funds from their members?

Research costs money but there’s been almost nothing there for bison ranchers, while land grant colleges offer extensive research funds for other livestock businesses, chickens and even goats. Now surely someone will find funds for bison.

Congratulations everyone who has worked on this—and who will see that there is solid bison research coming together in the future. Best wishes to Dr. Kristi Cammack, newly installed Director. An amazing beginning, long overdue!!