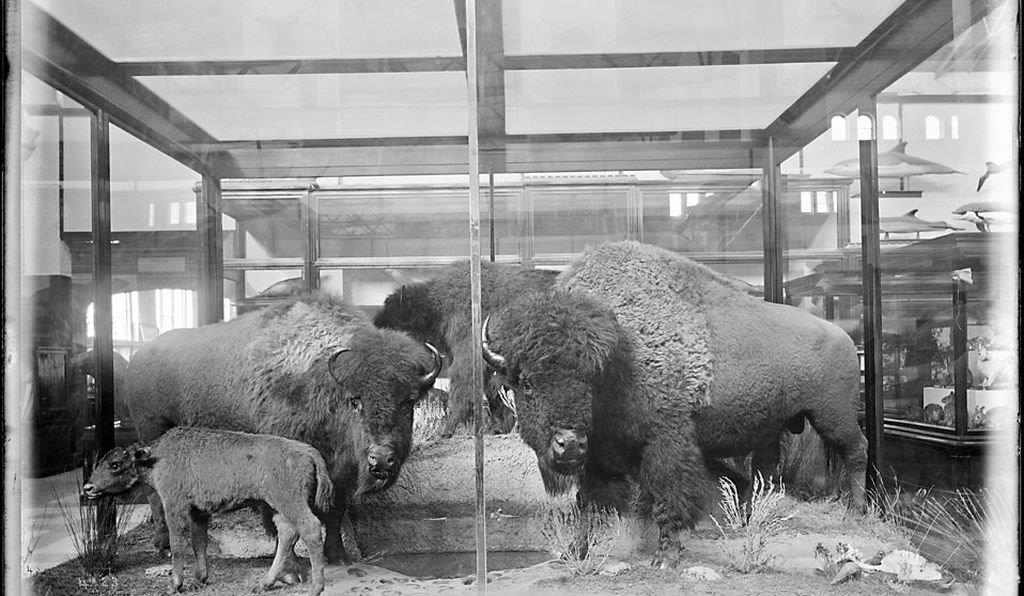 William Hornaday’s famous six-buffalo masterpiece in huge glass case set a new standard for Smithsonian Museum taxidermy in 1888. During their 70 years in Washington, Hornaday’s big bull that he’d shot himself, became the model for several national symbols. Coins and paper currency, the Great Seal of the Department of the Interior, postage stamps and the National Park Service badge all bear the likeness of his big bull in the Hornaday Collection. Photo from The Extermination of the American Bison.

Returning to Washington, after their great success in buffalo hunting, William Hornaday and his assistants set to work.

Hornaday’s vision developed before he even left Montana. This would be a grouping of bulls, cows and calves. He took time to collect some native soil, a few plants and sagebrush.

After a full year they unveiled their masterpiece. There, in a huge glass case, visitors to the Smithsonian Museum viewed an enchanting scene–six buffalo in an authentic Montana setting.

The Washington Star described the exhibit on March 10, 1888:

“A little bit of Montana—a small square patch from the wildest part of the wild West—has been transferred to the National Museum. . . The hummocky prairie, the buffalo-grass, the sagebrush, and the buffalo.

“It is as though a little group of buffalo that have come to drink at a pool had been suddenly struck motionless by some magic spell, each in a natural attitude, and then the section of prairie, pool, buffalo, and all had been carefully cut out and brought to the National Museum.

A triumph of the taxidermist’s art.”

It was a sight Hornaday fully expected no one would ever see again in life.

Secretly he hid a message voicing his despair for the species in a small sealed metal box in the Montana earth of the Smithsonian display.

Discovered nearly three-quarters of a century later when the exhibit was moved to Montana, curators read Hornaday’s heartfelt plea:

It read, “My Illustrious Successor, Enclosed please find a brief and truthful account of the capture of the specimens which compose this group. . .

“When I am dust and ashes I beg you to protect these specimens from deterioration and destruction.  —W.T. Hornaday, Chief Taxidermist, March 7, 1888.”

During their 70 years of prominent display in Washington, Hornaday’s big bull, that he shot himself, was the model for several national symbols and government issues.

Coins and paper currency, the Great Seal of the Department of the Interior, postage stamps and the National Park Service badge all bear the likeness of the big bull in the Hornaday Collection.

In 1955 the group was dismantled. shipped to Montana, separated, and placed in storage. 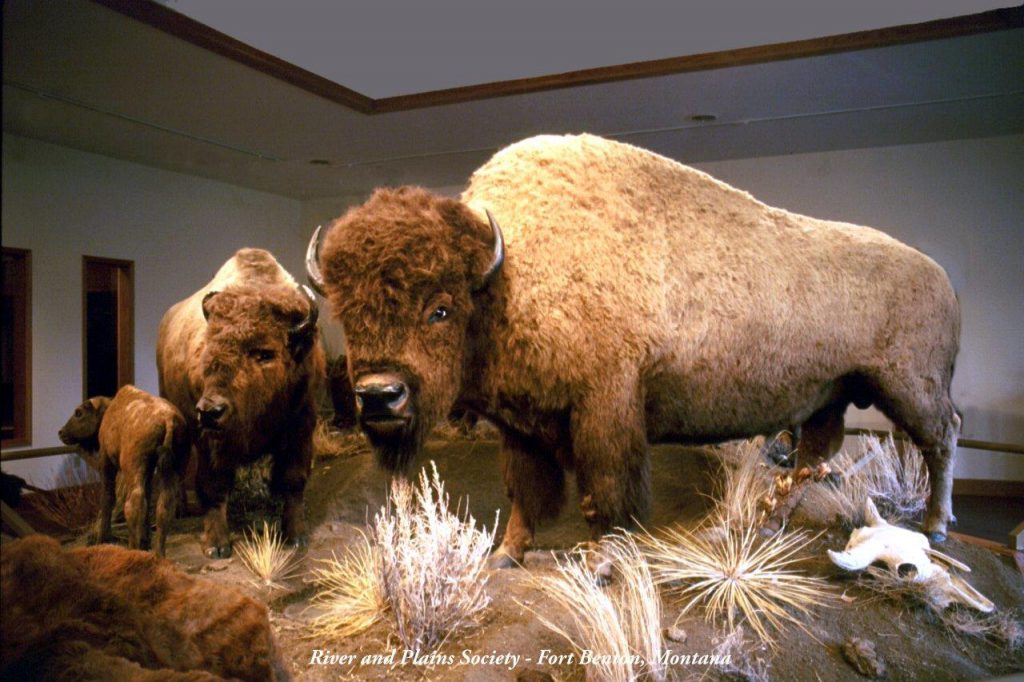 Seventy years later, during the 1950s the pieces were shipped to Montana and separated, when Hornaday’s plea was found hid in a metal box in the soil. Refurbished in the 1990s, all six bison came together again and now stand on a pedestal in the Montana Agricultural Center and Museum in Fort Benton. A shrine to the buffalo’s loss and rebirth and the group’s dispersion and reunion. Photo by Montana Historical Society.

After years of neglect the mounts were completely restored and returned to public display in 1996.

Refurbished, all six finally came together again and are exhibited in their original poses and positions just as they appeared in the Smithsonian.

They now stand on a pedestal in the Montana Agricultural Center and Museum in Fort Benton. A shrine to the buffalo’s loss and rebirth and the group’s dispersion and reunion.

But with his masterpiece in the Smithsonian Hornaday was not finished.

During that same year in 1887, he took on the task of writing what he expected might be the last word on the iconic buffalo—a report of its history and how the species came to be exterminated—which was published in the Annual Report of the Board of Regents of the Smithsonian Institution for the Year of 1887.

Convinced this might be the final report on the buffalo, he wanted to get it right.

His report was over 200 pages long. Two years later in 1889 it was published as a book “The Extermination of the American Bison: With a Sketch of its Discovery and Life History,” by the Government Printing Office.

Then Hornaday discovered a future in living buffalo—and never looked back.