Hornaday’s Buffalo Hunt for the Smithsonian 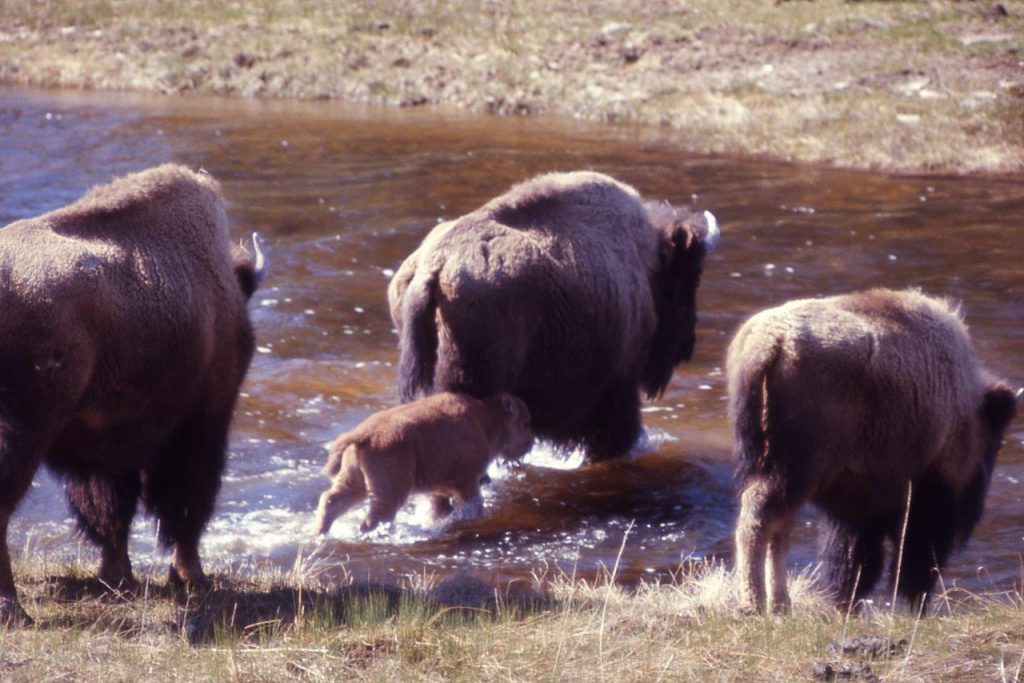 Small bands of buffalo the Smithsonian party found hiding in remote canyons in the Missouri River Breaks were extremely wild. Many carried old bullets of various sizes within their bodies. NPS.

By 1883 the vast herds of buffalo had entirely vanished. Only a small pocket survived here and there in remote areas—and even these, as soon as any hunter learned of them, did not last long.

Clearly the buffalo would soon be extinct as a species.

Alarmed, William Hornaday, as the Chief Taxidermist at the Smithsonian Museum in Washington, DC—America’s greatest museum—took stock of his museum’s buffalo inventory.

He was shocked to find only a few old, dilapidated buffalo hides, one poorly mounted female, a couple of heads and some bones.

He knew what he had to do: gather some decent buffalo carcasses for his museum so that long after the species became extinct, at least there’d be mounted buffalo to view in the nation’s most important museum.

And since other prominent museums would doubtless want relics of the soon-to-be-extinct mammal—and he could help them—he wanted at least twenty to thirty skins, plus skeletons and heads.

Now, he thought, Americans in later generations would be able to see the great mammal that had once populated America by the millions. It would be too late, of course, and they’d need to travel, but they could visit—albeit only in great museums—the magnificent buffalo that had once grazed the Plains in abundance.

He pleaded with Smithsonian officials to let him go out west where he might find some buffalo and bring back dead carcasses.

Appalled at his report, they agreed to send him at once to find wild buffalo, if any were still living, and bring back specimens.

Research told him there might be some buffalo still in the rugged Missouri River Breaks of Montana.

Hornaday hoped to bring back sixty to eighty specimens if at all possible. At this point, as a taxidermist, dead buffalo were all he wanted, so their skins could be preserved and mounted.

So on May 6, 1886, William Hornaday and two or three assistants set forth by train to Miles City to launch their own last buffalo hunt.

In Miles City they picked up horses, provisions and an Army escort from Fort Keogh and headed north.

Nearly everyone they met declared all the buffalo were gone from central and eastern Montana.

But they kept going, chasing rumors from distant cow hands.

Hornaday’s party finally found its way into the rough badlands near the head of the Little Dry in the Missouri River Breaks.

There they discovered and captured a lone, lost buffalo calf. Ten days later they found a couple of bulls. They shot one and realized he was shedding his winter coat, leaving the hide so tattered and seedy looking it could not be mounted.

They decided to wait till fall for hides in prime winter condition. After Hornaday beseeched local ranchers to spare their intended targets, they took the live calf and returned with it to Washington.

In late September they returned to the same remote badlands, some 135 miles northwest of Miles City.

It was “Wild and rugged butte country, its sides scored by intricate systems of great yawning ravines and hollows, steep-sided and very deep, and badlands of the worst description. Such as persecuted game loves to seek shelter in,” wrote Hornaday.

In two months of hard riding they did find a few small bands of extremely wild stragglers—a lone buffalo bull here, two or three cows with calves there. Seven in one bunch.

By this time they had ten saddle horses and the help of a few soldiers from Ft. Keogh.

Splitting up, they rode twenty-five miles or more each day in different directions. Searching out “the heads of those great ravines around the High Divide . . . [where] the buffalo were in the habit of hiding.”

They eventually killed twenty-two buffalo—bulls, cows and calves. Not the number Hornaday hoped for, but a raging November blizzard with bitter cold cut short their hunt.

Hornaday felt pleased with the big bull he shot himself. “A prize! A truly magnificent specimen. A ‘stub-horn’ bull, about eleven years old. His hair in remarkably fine condition, being long, fine, thick and well colored—sixteen inches in length in his frontlet.”

His bull stood a full six feet tall when they added the four-inch hair on the hump, two inches taller than their next largest bull.

In length, he was nine feet-two-inches, head to tail. In circumference, eight-feet-four around the chest just behind the foreleg.

The bull had been shot several times before. Within the carcass he carried four old bullets of various sizes, as did nearly every bull they killed in those hidden canyons.

All the buffalo were extremely wild.

Regretfully, Hornaday lamented that if the buffalo had been that wild during their heyday, surely more would have survived longer.

However, his hunt was a success. He and his assistants prepared their hides for shipping and headed back to Washington to spend the next year in a great taxidermy project he envisioned for the Smithsonian.

At that point Hornaday could have rested on his laurels, but fortunately for us, he did not.

Instead, he spent the rest of his life fighting for the conservation of buffalo.

No longer satisfied with carcasses, he developed a vision for living buffalo—a way they could be kept safe in parks and public lands across America.