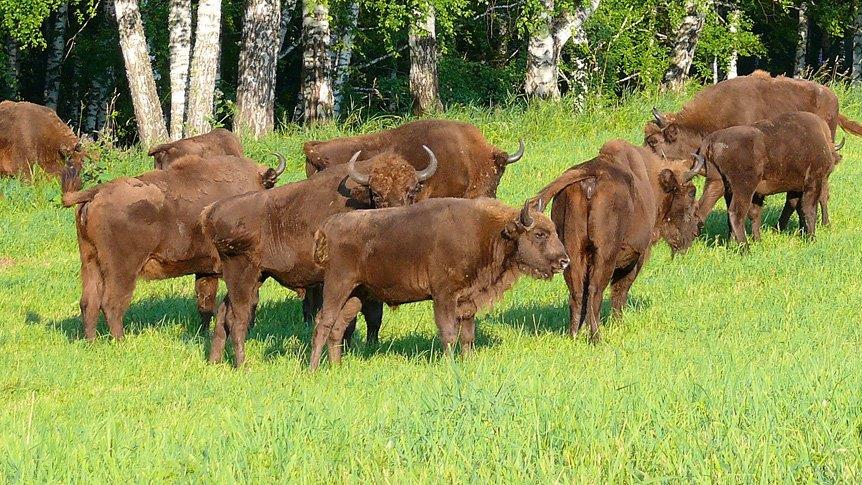 Plan is to revive forests and historic species

Wild bison will return to the United Kingdom for the first time in thousands of years, with the release of a small herd near Canterbury in East Kent planned for spring 2022, according to the Guardian, July 10, 2020.

The Steppe Bison went extinct about 10,000 years ago. Now the UK is bringing back their nearest relative—the European Bison or Wisent (Bison bonasus), also known as the zubr—in the hope of restoring the area’s ancient woodlands.

The $1.4 million Wilder Blean project, to reintroduce the animals, will help secure the future of an endangered species. They will also naturally regenerate a former pine wood plantation by killing off trees. This is expected to create a healthy mix of woodland, scrub and glades, boost insect, bird and plant life.

Populations of the UK’s most important wildlife have dropped an average of 69% since 1970. Britain is one of the most nature-depleted countries in the world, despite the best efforts of conservationists.

Paul Hadaway, from Kent Wildlife Trust, said: “The Wilder Blean project will prove that a wilder, nature-based solution is the right one to tackle the climate and nature crisis we now face. Using missing keystone species like bison to restore natural processes to habitats is the key to creating bio-abundance in our landscape.”

Bison kill selected trees by eating their bark or rubbing against them to remove their thick winter fur. This creates a feast of dead wood for insects, which provide food for birds. Falling dead trees also create sunny clearings in deep woods where native plants can thrive.

The trust expects nightingales and turtle doves to be among the beneficiaries of the bison’s “ecosystem engineering.”

The European bison is the continent’s largest land mammal and bulls can weigh as much as a ton. “They’re enormous,” said Stan Smith of Kent Wildlife Trust. “But what is amazing is how they blend into their background and they’re quite docile really.”

The bison will not be given extra food or artificial shelters, though their health will be monitored by observing their coats and examining their dung. “We need to keep them as wild as possible [for the project to succeed],” said Smith.

Once the bison are settled, the public will be able to visit the area with rangers and watch the animals from viewing platforms.

In the Netherlands, where bison projects have been running for 15 years, people walk through the areas without incident. Free-living longhorn cattle, “iron age” pigs, and Exmoor ponies will also live alongside the bison and assist in restoring the woodland.

“The partners in the Kent project have long dreamed of restoring the true wild woodlands that have been missing from England for too long,” said Paul Whitfield, of Wildwood Trust, the native species conservation charity that will ensure the welfare of the bison. “People will be able to experience nature in a way they haven’t before, connecting them back to the natural world around them in a deeper way.”

Smith said there is no intention to introduce predators such as wolves. As the herd grows in size, they will move some animals to other sites in the UK. But, he said, “if we absolutely had to, we would cull animals as a last resort.” There are already a small number of European bison in English zoos and wildlife parks, but they are not free-living.

“This initiative could be good news for Britain’s battered biodiversity,” said Rebecca Wrigley, of Rewilding Britain. “It’s increasingly clear that bold and imaginative rewilding is urgently needed to tackle the country’s worrying loss of wildlife.”

She said far more needs to be done across the UK to reintroduce large herbivores and “unleash their biodiversity-boosting rewilding magic.”

Smith said: “Sometimes in the rewilding debate people think that it’s a look back to the past, but that’s not what we’re about. We’re about trying to find the right natural solution for the modern world.”

Describing European bison as “ecosystem engineers,” the Kent Wildlife Trust, one of the conservation organizations leading the project, said the bison species can “change woodlands in a way that no other animal can.”

“They eat bark and create dust baths which each have benefits for many plants and animals,” the trust added. “These are functions that have been missing from our UK woodlands for thousands of years and bringing them back can help restore an abundance of wildlife.”

The breed is the closest living relative to ancient steppe bison, which once roamed Britain.

Herds were established from zoo-bred animals in Belarus, Poland, Lithuania, Russia and Ukraine. Ub 1927 fewer than 50 were left—all of them in zoos.

Beginning in 1951 they were reintroduced to the wild. Free-ranging herds are currently found in Poland, Lithuania, Belarus, Ukraine, Bulgaria, Romania, Russia, Slovakia, Latvia, Switzerland, Kyrgyzstan, Germany, and in forest preserves in the Western Caucasus. The Białowieża Primeval Forest, an ancient woodland that straddles the border between Poland and Belarus, continues to have the largest free-living population in the world with around 1,000 wild bison counted in 2014. Currently they are classified as a vulnerable species.