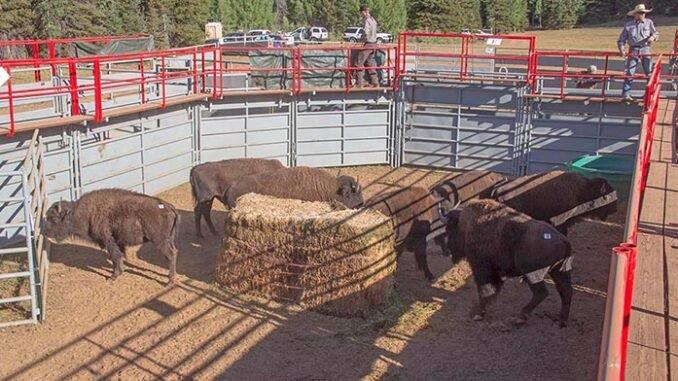 The Grand Canyon National Park team corral and feed 31 bison for the final pilot program transfer from the North Rim to the InterTribal Buffalo Council on Sept. 18, 2019. They will join the Quapaw herd in Oklahoma. Photo courtesy NPS by Bryan Mau.

Grand Canyon, AZ, Sept. 18, 2019 – National Park Service staff closed the doors on livestock trailers yesterday, securing 31 bison inside to transfer them to the InterTribal Buffalo Council who will take them on the journey to their new herd with the Quapaw tribe in Oklahoma.

The transfer of the bison concluded the Grand Canyon National Park’s pilot program for corralling and relocating bison from the North Rim.

Leading up to the corralling operations, a corral was regularly supplied with food and water to encourage bison to enter freely and increase their exposure to humans.

“It’s a passive process. You want to work as quietly and calmly around the bison to keep their stress levels down because they have very little interactions with humans,” said Chris Clark, the South Rim lead mule packer who served as the corral boss, advocating low-stress handling methods.

After a large group of bison entered the corral during the operation period, staff closed the corral gates and began processing them in preparation for shipment. The processing included separating and releasing bison that were too young or too large or old to make the trip. They were guided into a squeeze chute, where the scientists took blood and genetic samples and tagged them per U.S. Department of Agriculture shipping regulations.

“We had an amazing team who worked really well together,” said Terwilliger. “We did a lot of mock runs and training in advance with other parks and agencies.”

Several additional animals were outfitted with tracking collars and released during the corralling process. The collaring was conducted with the assistance of U.S. Geological Survey scientists for park wildlife biologists to study the bison migratory patterns and population size.

The goal of the pilot program was to capture and relocate up to 100 bison. The pilot program was conducted this year due to the bison migrating to a warmer location on the North Rim from early snowfall last year. There are approximately 600 bison on the North Rim, and Grand Canyon National Park is reducing the size to under 200 over the next three to five years to protect park resources from the impacts of bison over-population.
(Press Release: Sept 19, 2019.)