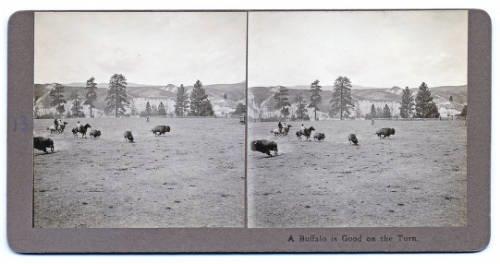 This photo illustrates the difficulty of trying to chase buffalo where they don’t want to go, especially when all run in different directions. Bud Cotton’s Buffalo Roundup Gang rode hard and bore “scars and sore bones” from the “good old days” of roundup. Montana Historical Society.

E.J. (‘Bud’) Cotton was the Buffalo Park Warden at Wainwright, Alberta from 1912 through 1940. An old-fashioned buffalo handler who rode hard and worked his crew hard, he preferred to change their lathered-up horses at noon if at all possible.

Cotton hired a hard-riding Buffalo Roundup Gang—as he called them for “fall” roundup, which they tackled in stride during the coldest days of winter.

Long before the advent of low-stress handling practices were being advocated for buffalo, the buffalo herds were literally wild animals, and they came stampeding between the drift fences toward the open gate at a dead run.

Cotton said his corral fences looked strong enough to hold an elephant “but just stick around until we run a bunch of buffalo into them, then watch the splinters fly!”

When worked, the thousands of buffalo they corralled and manhandled bore some scars—but so did the riders, he wrote. Even years later the men “still bear scars and sore bones as mementos of those same good old days.”

Roundup days for buffalo, unlike on cattle ranches—where the herd was rounded up, steers sorted off and sold in the often-delightful golden days of fall—happened during the coldest days of winter, when buffalo hides were prime.

“With the buffalo it’s different, as both beef and hide count, and the buffalo’s hide is not considered prime until about December or later. This hide, when prime, makes beautiful robes and coats. That is why you will hear of riders hitting the roundup trails in 40 below zero weather, right up to their necks in snow banks.”

At Wainwright thousands of buffalo were rounded up each fall—from their 200 square-mile pasture bordered by 9-foot-high fences.

“Buffalo we had corralled, branded and manhandled by the thousand bore some scars and brands—but then the riders still bear scars and sore bones as mementos of those same good old days!”

“Bert Kitchen should still show some scars. We happened to be heading fast through a narrow draw on the high lope, eight riders strung out head to tail, trying to head off a bunch of break-away buffalo.

“Bert was in the lead when his horse went down, some of our horses jumped over him and some just walked down his lanky frame. Our horses were all shod with ‘never-slip’ or Spade Caulks.

“We all sighed ‘Poor Bert,’ but by the time we had circled back to the rescue, Bert had picked himself out of the snow and was mounted again, and mumbled something about how he had busted his cigarette lighter.

“[One morning] the riders had picked up about 2,000 buffalo in west hills and we figured we had them safe as we headed them for the Jameson Lake Gate, only about a mile away.

“George Armstrong trying to head a bunch of break-away buffalo raced out on one of the ice-covered bays of the lake.

“Then PLUNK… horse and rider were in the lake’s icy water. Everybody to the rescue! Ice covered lariats dragged George and his horse out of what could have been an icy grave.

“Ten below that day and George was kinda stiff in his crystalized clothes by the time he got to a warm fireside. However, he was out again the next day as we continued the roundup.

“He lost his Stetson and Pinto was somewhat wobbly as the buffalo unscrambled and let them see daylight once more… As Blake said, ‘It could have been worse!’”

Cotton told his riders that if their horse left them afoot, they should climb to the top of the nearest butte and “we’ll come back and pick you up later. Once we start the buffalo running we can’t leave them till we hit the corrals… Your horse will be running with us.”

“Jack Johnston was on our Riding Crew. He raced his buckskin pony ahead to open a gate for us, but apparently the buffalo were coming just too fast. Guess about 20 head of buffs ran over him. Lucky though, they were light ‘shippers’ so Jack was able to keep his date down Greenshilds way that night.

“Dick McNairn rode with the roundup crew for many a winter and could tell you tales of fast running buffalo and cold miles of saddle polishing. Dick riding hard and close, trying to haze in a big grumpy buffalo bull on one of our roundups.

“Down goes his horse in a slitherin’ roll, the bull whirls and stands there looking Dick right in the eye. Dick was pinned down by one leg as the horse rolled, but he looked that old bull in the eye. The bull snorted and loped away just as we were riding up to unscramble one lone rider.

“Hi Dunning tied onto a balky buffalo cow and hitched her hard and fast onto his saddle horn. Now a buffalo cow is not bashful and sure is active. Things started to happen fast!!

“First his saddle cinch loosened and the saddle started to turn. About that time his horse just didn’t like the looks of the buff cow so close and hooked one hind leg over the taut rope and started to buck.

“Hi was sure in the middle of trouble with no hope of getting that hard knot from the saddle horn.

“Still Hi was uncertain whether to bless Warren for saving him from a real dirty mix-up, or to cuss him for cutting his brand new Italian hemp lariat!

“Generally, we had about 12 regular riders on the roundups. We always looked forward to the times that the Gang rode together.

“Taking hard knocks, broken bones and bitter cold weather as a matter of course, our riders came back year after year, because there was something fascinating and a surging exhilaration that only the Buffalo Riders will ever know.

“Only these riders experienced the thrill of careening over an open Range for miles with 5,000 to 8,000 buffalo thundering along in flying dust of snow clouds.

“Park Regulations prohibited any visitors on our roundup drives, so we the Crew rode alone to sights and scenes that we will never forget.
(Excerpted from an article in “Buffalo Trails and Tales: Wainwright and Districts,” written by Bud Cotton, Buffalo Park Warden at Wainwright, Alberta, 1973.)