Noble Fathers we saw in Actiond 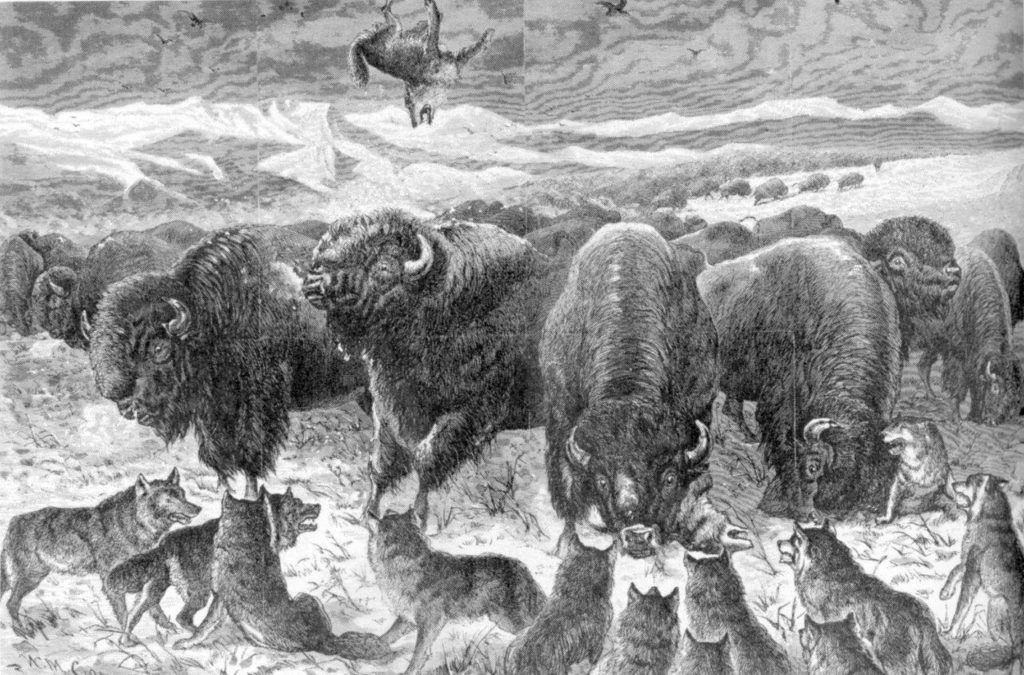 Buffalo bulls are born with a strong sense of responsibility.

The “noble fathers,” as they’ve been called in earlier times, for protecting mothers and calves from the ravages of wolves. In blizzards and fierce storms, it was said, they form a triangle facing into the wind and shield cows and calves from wintery blasts.

We were riding horseback in the North Unit of Teddy Roosevelt Park with some friends.

Our kids were teenagers then and we were about 15 riders. We rode over a hill and saw below us—spread out and grazing—a herd of about 60 buffalo.

They looked up, startled by the sudden appearance of so many riders, and started to run. We pulled in our horses and paused to watch.

They didn’t run far. The big bulls stopped in an open area and formed a tight circle facing us, shaking their massive heads, while cows and calves took the inside.

It was clearly a defensive position they all understood—and we did too—the calves well-hidden and protected with their moms, and the males ready and eager to take us on.

Describing a similar defense in the 19th century, Colonel R.I. Dodge, wrote in his Plains of the Great West:

“The bulls with heads erect, tails cocked in air, nostrils expanded and eyes that seem to flash fire, walk uneasily to and fro, menacing the intruder by pawing the earth and tossing their huge heads.”

We paused and watched the amazing bulls for awhile, charmed to think that for over 100 years this herd and their ancestors had lived safely inside the national park—without any large enemies to fear.

Yet this generation of noble fathers stood ready to fight us off and protect with their lives the young calves and their mothers, just as dozens of observers described their responses to danger long ago.

No hungry wolves would have broken through their defenses that day!

No wolves or grizzly bears or hunters.

Of course, we skirted far around the herd and let the bulls think they had stood off our attack.