Buffalo take care of each other, says Mike Faith, who was Standing Rock’s Buffalo Manager for some 20 years. He’s now Tribal Chairman.

Faith says buffalo watch each other for warning signs of danger or stress.

When it comes time for a cow to give birth she finds a secluded place such as a ravine with trees. There she has time for herself, to be alone when the calf is born.

When alone, she is able to bond with her newborn, nourish it, and defend that calf until its strong enough to join the herd.

But she’s not quite alone. The mother has several female friends who hang around—not so close as to interfere, says Faith—but near enough to watch for predators and possible interruptions. 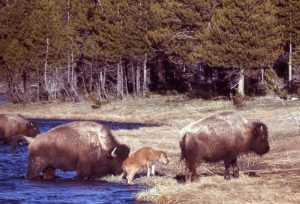 : Buffalo cows often watch out for each other, and give help when needed. National Park Service.

“If a new mother gets up and moves away before she’s ready, she might not bond with her calf.

“If she gets spooked, she might abandon her newborn and not come back. The calf might die of starvation.”

Faith recalls that one morning he saw three cows acting in a peculiar way.

They were grazing on the plateau above a cut bank. One at a time, each buffalo cow walked over to the edge of the cut bank, looked down at the flat below for awhile and then returned to her grazing.

They stayed nearby, and occasionally each one went back and looked over the bank again.

As he sat in his pickup and watched, Faith couldn’t see what the cows were concerned about, but didn’t want to disturb them.

So he drove around where he could see the grassy area below the bank.

There he saw two coyotes circling a young, sleeping calf at some distance.

As he drove closer, the coyotes saw him and started to run.

They disappeared over the hill, but Faith said he had no doubt if the coyotes had come too close to the sleeping calf, the cows would have charged down the trail and chased them away.

The buffalo mother’s two friends were helping her keep watch and protect the sleeping calf.