Bison market crashes down on producers

By Robert Arnason
The Western Producer
May 12, 2020

Only a couple of months ago, the price of a bison carcass was close to $5 a pound in Western Canada.

But that number isn’t precise because the packing plants are processing very few animals. 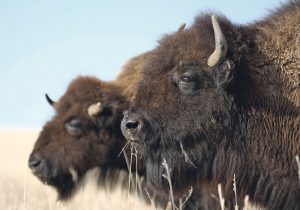 Many producers depend on bison meat sales to the U.S. and Europe to maintain the price of bison in Western Canada. With restaurants closed in America and across the European Union because of COVID-19, exports of Canadian bison meat have fallen off a cliff.

“There’s no liquidity right now,” said Dean Andres, who raises bison near Windthorst, in eastern Saskatchewan. “Any Canadian (bison) producers that are reliant on a Canadian plant or somebody to buy their calves, that market has, I don’t want to say ‘collapsed,’ but that’s probably the most accurate word.”

“The (meat) inventories in Canada are scary right now,” Andres said. “It was destined for Europe or restaurants. And then when things shut down … a lot of marketers were stuck.”

Within Canada, the bison trade sells the majority of meat to restaurants and food service companies. A small percentage is sold at grocery stores.

High-end cuts of bison from those plants, like sirloins, tenderloins and rib eyes, would normally be exported to Europe, but the price of air freight has become a massive barrier.

“We’re paying $15 a kilogram to ship in there…. Freight is usually around $3 per kilo,” Andres said, explaining that European customers pay a price for bison meat that includes shipping. Canadian exporters cover the cost of freight.

“We’re all crossing our fingers…. Airlines flying would definitely help the Canadian bison market because most of the bison that are slaughtered, part of the carcass does go to Europe.”

While bison meat exports to the U.S. have slowed, live bison exports are similar to 2019. From January to March live animal exports were worth $17.7 million, nearly a carbon copy of the $17.6 million in the first three months of 2019.

America’s bison trade continues to slaughter and sell a significant number of animals, despite the closure of thousands of restaurants.

Bison is available at most grocery stores in America, including major players like Costco. Consequently, the U.S. bison trade is better positioned to shift additional sales to retail.

“They have their loads booked for the year. So those guys are doing pretty well, even though the price has dropped quite a bit in the U.S.”

The value of bison calves is also down in Western Canada. At the last sale, most calves sold for less than $1,000. Some were close to $700.

“Those are post-BSE prices. It’s a little bit scary for a lot of producers.”

Something that could help bison producers is the federal Surplus Food Purchase Program, a $50 million initiative announced early May. If the feds would buy some of the bison meat in storage, more animals could be slaughtered, which might prop up bison prices and reduce the number of animals on feed.

“That offers some potential for the bison industry,” Kremeniuk said.

That’s one possibility, but there’s no silver bullet solution, he added.

This may require direct aid to help with feeding costs, more sales to Canadian grocery stores and more air traffic, which would reduce the freight cost to Europe.

“We definitely need to get some retail (sales) going (in Canada). It seems like restaurants are going to be very, very slow coming back,” Andres said.

“I think what’s most important right now is that we get back to killing bison so we don’t clog up the supply chain.” Contact robert.arnason@producer.com