Stories of amazing exploits by Native hunters were told and retold around evening campfires.

Living among the Northern Cheyenne for a time, George Grinnell recorded more than one time when a hunter shot one arrow entirely through the bodies of two buffalo.

And if an arrow did not sink deep enough, the hunter often jerked it out of the running buffalo and fired it again. 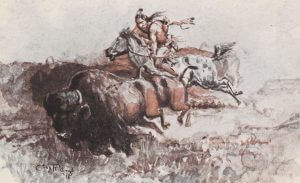 There were tales of daring that unless seen, seemed scarcely credible, Grinnell wrote in his journal.

In one of his stories, he told of Big Ribs, a Cheyenne hunter, who rode his horse close up alongside a huge bull and, leaping on his back, rode the buffalo for some distance.

Then he pulled out his knife and gave him the death stroke, in the precise spot to kill instantly, leaping off as the bull fell.

Strong Left Hand, a Cheyenne with special power and accuracy in stone-throwing, told Grinnell he once killed a buffalo with only a stone.

“We had been shooting at buffalo,” he said. “They started to run and as the last one was going by I ran ahead of it and as I did so, picked up a stone from the ground.

“As I got in the buffalo’s way it charged me, and raised its tail showing that it was angry. Just before it reached me, I threw the stone and hit it in the forehead, and it fell over, dead.”

In the same way with a rock, he said he had killed an antelope and an eagle.

In another hunt, a man called the Trader was thrown from his horse onto the horns of a bull.

One horn hooked under his belt and held him there while the galloping bull tossed him furiously back and forth.

Unable to jump off, the Trader bounced back and forth on the buffalo’s head for a considerable distance.

Finally the belt broke and he fell to the ground unhurt, while the bull ran off.

(George Bird Grinnell, The Cheyenne Indians: Their History and ways of Life, Yale U. Press,1923.)