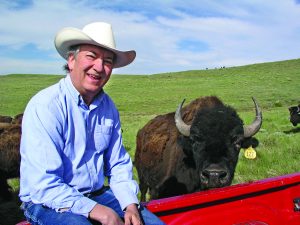 Dave Carter has served U.S. bison ranchers, marketers and supporters for nearly two decades. Under his leadership, NBA has forged strong relationships with key agencies in the U.S. Department of Agriculture and agricultural leaders on Capitol Hill.

The induction was announced in a surprise ceremony during the closing banquet of the National Bison Association’s 25th anniversary convention in Denver in late January.

Carter has served as the bison association’s executive director since 2001. During that time, the U.S. bison business recovered from a devastating downturn in 2000, and has grown into a strong steady sector of agriculture. Carter has aggressively promoted the health, environmental and culinary benefits of bison meat to the American public throughout his tenure as executive director.

Carter has also increased the National Bison Association’s presence in Washington, D.C. Under his leadership, the association has forged strong relationships with key agencies in the U.S. Department of Agriculture and agricultural leaders on Capitol Hill. In 2012, Carter linked the NBA with leaders of the InterTribal Buffalo Council and the Wildlife Conservation Society in a four-year legislative campaign that resulted in bison being formally designated as the National Mammal of the United States in 2016. He is currently working with key Senators and Representatives to pass the Truth in Water Buffalo Labeling Bill, which would halt deceptively labeled water buffalo meat and food ingredients from being sold in the United States.

The plaque honoring Carter in the Hall of Fame reads, “For close to two decades, Dave has guided the bison industry in an extraordinary way through good times and not so good times. He continuously places a bright light on the American bison to the public, the producers, the conservationists, the native community, and those in government who need to hear his message.”

Cecil Miskin, president of the National Buffalo Foundation, noted,” Our hats are off and our hearts are proud. Dave Carter is truly the best friend bison has had in this century.”

In addition to serving as executive director of the National Bison Association, Carter and his wife, Sue, actively maintain a small herd of bison which they operate in partnership with three other herds in eastern Colorado.

Carter joins 29 inductees in the Hall of Fame, including Charles Goodnight, Teddy Roosevelt and nine additional historical figures, as well as Ted Turner and 18 other contemporary bison champions. Goodnight was among the ranchers who helped bring bison back from extinction in the late 1800s. Turner has played a pivotal role in the modern restoration of bison.

The National Bison Association, founded in 1995, represents nearly 1,200 ranchers, marketers and bison enthusiasts in 48 states and 10 foreign countries. The National Buffalo Foundation is a 501(c)(3) organization dedicated to bison research and education.