The last wild buffalo had disappeared, along with their meat and hides. Their whitened bones had been picked up, hauled to the nearest railroad and sold for fertilizer.

But after all that, there was still one last gift of the buffalo sprinkled across the western plains—dried buffalo chips.

Native Americans had always burned buffalo chips where trees were scarce. These large, chips or “buffalo pies,” when dried burned quickly to start a fire. They produced hot fires to warm the tepee or to roast a meal.

White travelers and settlers quickly learned from Native Americans the value of these dried manure piles for a quick, hot fire with little smoke. The chips were conveniently-sized, about a foot in diameter and two or three inches thick. 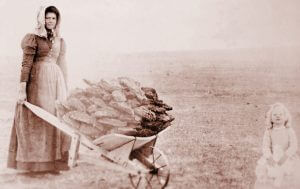 Some newcomers to the plains did not appreciate the task of collecting buffalo chips. Most were happy to have them when wood was scarce. NPS.

However, some eastern-bred women had a hard time accepting the idea of cooking a meal with buffalo chips, either in an open fireplace or their new kitchen stove.

Worse, their husbands often expected them to go out and collect the dried manure patties from the prairies, carry them home, and store them in a box by the stove.

Even though the dried chips no longer smelled like manure, many women thought it was simply outrageous that their husbands wanted them to cook family meals this way.

One Dakota cowboy told the story of a homestead woman he met one morning out on the prairie.

The woman, in her long calico dress, was collecting buffalo chips.

The cowboy took a break from his long ride to stop and chat with her a bit.

The woman was holding two sticks far out in front of her. With the sticks she gingerly picked up a fat, dry buffalo chip—her nose twisted in disgust—and dropped it into her wooden wheelbarrow.

“Howdy, Ma’am.” The cowboy tipped his hat and rolled a cigarette. “Getting’ some firewood this morning, I see?” he asked in a friendly way.

She wrinkled her nose. “It’s disgraceful!” she scoffed. “Look, there’s not even wood fothe fire! And I left our beautiful home in Ohio for this! I even grew yellow roses by the front door.”

He reached down, picked up a dry chip and dropped it into her wheelbarrow.

She did not smile. “Never! My husband! He was so determined to come out west. ‘Land of opportunity,’ he said. “Hmmph!”

He stayed awhile to be sociable, helping her and trying to cheer her up.

But she scowled bitterly, as together they loaded buffalo chips until the wheelbarrow was nearly too heavy to push.

Leading his horse, the cowboy pushed the wheelbarrow to the nearby tar paper shack, where her husband was working on a fence.

Without a word of thanks, she sniffed and went into the house, while the men exchanged greetings.

“Newcomer,” he chuckled to himself as he rode on.

A year later that cowboy happened to ride the same range and saw the homesteader woman.

Again, she was out on the prairie picking up buffalo chips.

But this time she worked quickly without her wheelbarrow.

Instead, she carried a load of buffalo chips in her apron, and handled them with expertise.

Gripping her scooped apron with one hand, she loaded on chips with the other, tucking a last chip under her chin.

She smiled and nodded as he rode up. “Good morning!”

He laughed, knowing she had found her way as a frontier woman.

In another community, the new teacher requested some kindling to start the fire, when her school board parent brought his little daughter to school.

Looking embarrassed, he said he’d already delivered the kindling against the woodshed.

After the man left, the teacher went back to the woodshed and looked, but saw no wood.

Puzzled, she walked once more around the woodshed.

“What is that pile of dried manure?” she wondered.

The light dawned. Gingerly she took a dried buffalo chip from the mystery pile, put it in her stove and found it burned well.

She had her fire starter, only it just didn’t happen to be wood.