I’ll leave you with a remarkable buffalo story—one of my favorites—told by a soldier on the Plains way back in buffalo hunting days.

One day an army surgeon was out buffalo hunting. As he headed back to camp he saw what he described as “the curious action of a little knot of 6 or 8 buffalo.”

Riding closer, he saw they were all bulls, standing in a tight circle with their massive heads facing out, snorting and pawing dirt.

A dozen large gray wolves danced around them in impatient expectancy, licking their chops. 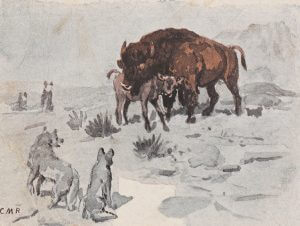 Large gray wolves danced around the circle of bulls in impatient expectancy, licking their chops, while the bulls faced them, snorting and pawing dirt. Painting by C.M. Russell, Courtesy of Amon Carter Museum

After a few moments the knot broke up, still keeping a compact mass, and started off for the main herd, a half mile away.

Then to his very great astonishment, the surgeon saw what the bulls were protecting—a newborn calf on wobbly legs in their center.

The calf stumbled 50 paces or so, then fell down.

The bulls again formed their protective circle around the calf, shaking their heads fiercely. The hungry wolves sat back down and licked their chops.

After watching this drama play out a few times—the calf struggling ahead, falling, the bulls tightening their circle, pawing dust and shoving—the surgeon rode on. 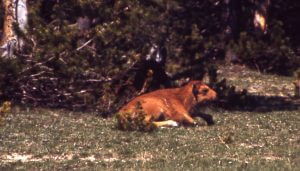 While the Army surgeon watched, the buffalo bulls protected one small newborn calf until he was strong though to catch up with the herd. Courtesy of National Park Service.

Telling the story later, he said, “I have no doubt the noble fathers did their whole duty by their offspring and carried it safely to the herd.”